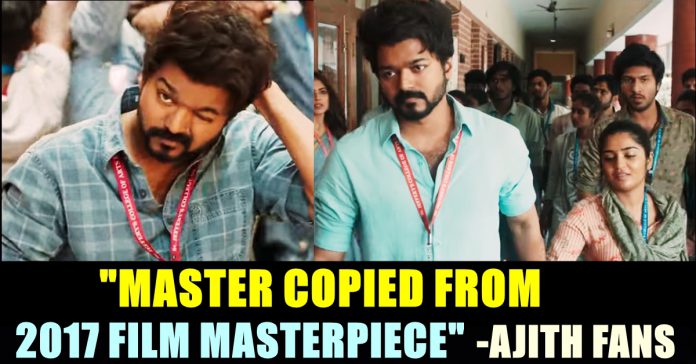 The much awaited teaser of “Master” released on youtube only make the fans to crave for the film. The 91 seconds long teaser promises a mass commercial action entertainer with a cat and mouse chase between Thalapathy Vijay nd Makkal Selvan Vijay Sethupathi. Starting the teaser by revealing the character name of Vijay, the teaser goes on to expose the roles of Malavika Mohanan, Shanthanu, Arjun Das, Gouri Kishan and others. Andrea and Master Mahendran were not seen in the teaser and are believed to be the surprise elements.

Nothing much is revealed in the teaser as it mostly serves as a showcase for Vijay fans to cheer him on. Seems to be a quickfire action thriller, with plenty of style and swagger, Vijay Sethupathi and Vijay heading towards a final shut down in the teaser. Watch it below :

As soon as getting released, the teaser garnered overwhelming response from the fans of the actors and from the common audience. Fans of actor Vijay are extremely happy as the power packed teaser brushed off the negativities that surrounded him for past few days regarding the political party his father initiated.

Meanwhile, on seeing the teaser, a number of fans compared the teaser with 2017 Malayalam commercial film “Masterpiece” of Mammooty. In the film, Edward Livingston (played by Mammooty) who appears as a professor, controls the ill manners of his students in his own style. Fans edited the audio teaser of “Master” with “Masterpiece” and comparing the two teasers.

A number of fans who had actor Ajith’s picture as display picture, went one step ahead and accused the upcoming film as a “copied” one. “Master is a copy from MasterPiece Malayalam Movie. Mammooty Movie” a fan wrote in his tweet.

Master is a copy from MasterPiece Malayalam Movie

Another followed named as Anitha Thala made similar accusation.

However, a latest rumour said that Vijay is playing a role of partially blind alcoholic professor in the film. It is believed that actor Vijay has played a role of an alcoholic professor who becomes partially blind due to excessive consumption of alcohol. It is a proven fact that prolonged heavy drinking can seriously impact eye health including the formation of cataracts, age-related macular degeneration and in some cases complete blindness.

With this challenge, the actor faces a situation where he is forced to take down a group of antagonists that consists Vijay sethupathi and Arjun Das with the help of his students. It is notable that the shooting of the film took place in a blind school which is located in Poonamalle. The actor could be seen wearing glasses like a visually challenged person in some of the posters that were released so far as well. Earlier, another rumour surfaced saying that the film is an unofficial remake of 2011 Korean film “Silence” in which the protagonist would help students who suffers from hearing-impairment.

Previous articleJUST IN : Next Wild Card Entry Of BIGG BOSS 4 Confirmed !!
Next articleCheran Got Extremely Emotional On Seeing This News About Losliya’s Father !!

Hashtag "Justice for Ankita" is trending in the micro blogging social media site with hundreds of people seeking justice for the demise of a...