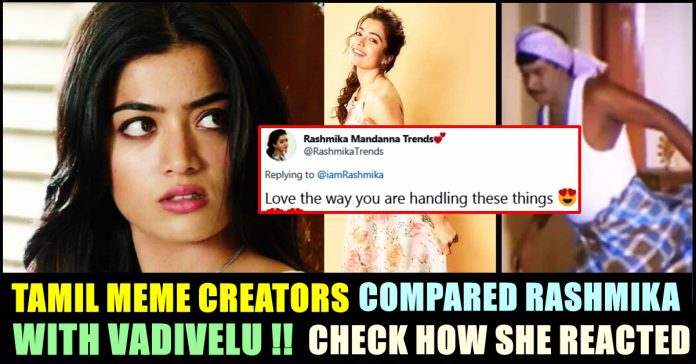 Rashmika Mandanna reacted to a meme which compared the actress with legendary comedian Vadivelu through her official twitter account. Her sportive manner gained her many more fans which is evident through the reach of her reply. The reply comment made by Mandanna liked by more than thirty thousand people so far.

Rashmika is yet to make her onscreen debut in Tamil films but the reach for her among the Tamil cinema audience is wide. A song from her Telugu film “Geetha Govindham” which starts like “Inkem Inkem” gained her the fame among Tamil cinema audience as it became a huge hit among the online fans of Tamil cinema. She is also one of the many actresses who are very much interactive with their followers in online.

Recently, the actress conducted a photoshoot and released several pictures of herself from it. In the pictures, we could see the actress giving quirky expressions and strange poses which was loved by the fans. She posted few pictures from the photoshoot in a way of promoting her recently released film. Check out the post here :

Hey hey hey…🐒 Have you guys watched #Bheeshma yet?
If yes – geme your reviews…..
If no – well, it better be cz you haven’t got the tickets….😜🤷🏻‍♀️ pic.twitter.com/yWZElEMKHB

After seeing these pictures, Tamil fans of the actress created a meme and compared the expressions of the actress with legendary Tamil comedian Vadivelu. To our surprise, every pose of Rashmika synced in well with Vadivelu and the post went extremely viral as it even became a particular column in Times of India.

On seeing these comparison, the 23 year old actress reacted in a cool manner. She wrote “I can’t agree more. Vadivelu sir is soooo cuteeee♥”

This sportive reply from Rashmika Mandanna won the hearts of her followers which is evident through the comment section. Check out some of the reactions below :

Wow. You are such a sport. You take it in a good way. Welcome to Kollywood 👍

Is this negative? he is Legend 🤫

Love the way you are handling these things 😍😍😍😍😍 pic.twitter.com/ZlrAHqjAXe

Rashmika Mandanna is one of the very few actress who got fame and place in the hearts of many fans in a very short span. Despite being part of very few films, the number of fan pages in social media for the actress is sky level. The Geetha Govindam actress is one of the first candidate who believed to be paired with actor Vijay in “Bigil” but Nayanthara grabbed the role. She was also approached for “Master” according to reports.

Now the actress is all set to debut in Tamil films through “Sultan” in which she is going to pair up with Karthi. The film is being directed by “Remo” fame Bakkiyaraj kannan and the film is expected to hit the screens soon.