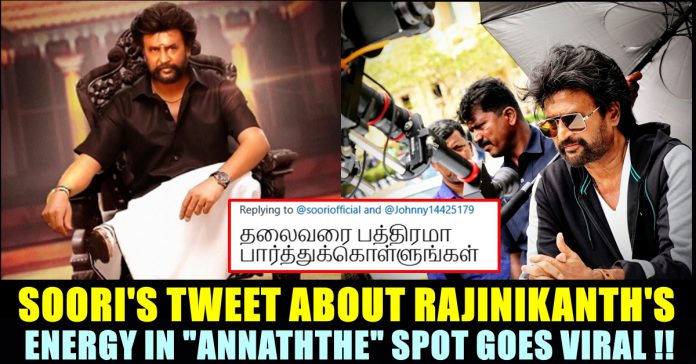 On Thursday, Super star Rajinikanth left for Hyderabad to join back the sets of his upcoming Tamil film Annaththe to complete the project which was interrupted due to COVID 19 outbreak. Videos and pictures of the star getting off at the airport and waving to his fans is going viral in social media platforms. Now, a tweet uploaded by Soori about Rajinikanth’s energy in the shooting spot of the “Siruthai” Siva directorial has left the online fans of actor Rajinikanth to erupt in joy.

Superstar Rajinikanth whose career spans more than 40 long years, has earned the highest number of fans comparing to all the actors in India. Being debuted in Aboorva Ragangal, Rajinikanth managed to do 167 film so far and is still giving nightmare to his rivals. The other actors of his age in India started doing supportive roles whereas Rajinikanth is still doing the roles of protagonist in his movies and the most special thing about it is, the level of craze for the actor today is no less comparing to the level of craze fans had on him during his prime time.

After acting in “Darbar” of A.R Murugadoss, Super star Rajinikanth got committed to act in “Annaththe” which is being directed by Siva of “Vaaram”, “Viswasam” fame. Touted to be a rural drama, the film includes an ensemble cast of Nayanthara, Keerthy Suresh, Meena, Khushbu and others. Film’s music is being composed by national award winning musician D. Imman.

In December 2020, the makers were forced stop the film’s shoot due 8 members of the film crew infected with COVID 19 virus. Rajinikanth was admitted to a hospital a day later after his blood pressure fluctuated drastically. After Rajinikanth got advised by doctors to take one week of bed rest, Rajinikanth is finally returning to fil set of “Annaththe”.

Meanwhile, Actor Soori who is also playing a prominent role in the upcoming film of Rajinikanth, replied to a fan on Rajinikanth’s energy in the film set of “Annaththe”. He initially quoted a tweet of Sun pictures about Suriya’s upcoming film and said “Super semma”

Replying to this tweet, a fan asked to tell him any update about “Annaththe”. Replying to the fan, Soori said “Thalaivar shooting spotla kalakkuraru vera level energy” and the reply is going viral among the fans of Superstar Rajinikanth.

Check out some of the reactions from Rajinikanth fans for this tweet below :

Previous articleImran Khan Blamed Women’s Dress For The Rise In Rape Cases !! Ashwin Schooled Him
Next articleMaaran Criticized “Karnan” !! Got Trolled For His Film’s Ban

Thoothukudi Government Medical College Hospital witnessed an unprecedented admission of people with bleeding injuries and gunshot wounds caused during the violent protest at the...

Along with cinema celebrities, people who are associated with them also becoming a subject to online trolling. Jwala Gutta, Indian professional badminton player and...

After the initial reports, details about the real reason behind Kannada Super star Puneeth Rajkumar 's death are out. The actor who is widely...