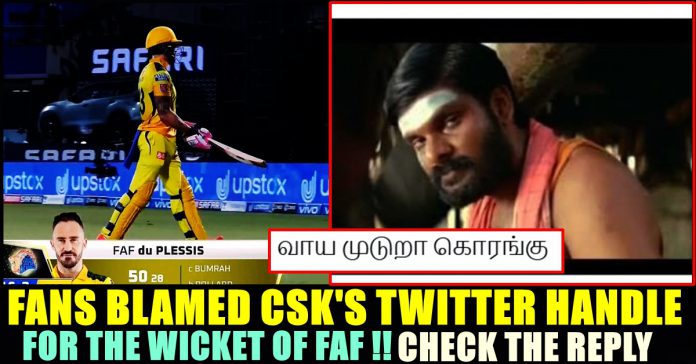 While CSK was doing extremely well in the first ten overs of their batting innings, wickets of set batsmen such as Moeen Ali, Faf Du Plesis and Suresh Raina fell down back to back. Fans of the Dhoni led team who were following the match, blamed the official twitter handle of Chennai Super Kings. They believed that the “praise” tweets that are surfacing from the twitter handle is jinxing the team. Reacting to the comments, CSK said that they won’t be praising the players through their tweets.

In the fifth ball of 11th over, Moeen Ali got out in the delivery bowled by Jasprit Bumrah after scoring a quickfire half century. In the very next over, Pollard single handedly stalled the momentum of Chennai by sending Faf Du Plesisis and Suresh Raina to the pavilion. No other game in the IPL garners as much attention as this clash. The kind of adulation these two teams have received over the years has been unparalleled. They share eight titles between them with half of those decided over a direct face-off. The biggest of names and the greatest of memories have been witnessed whenever these two have faced each other.

Rohit Sharma wanted to chase after winning the toss and MI have made two changes to their XI. James Neesham has replaced Nathan Coulter-Nile and that will bolster that batting in Ishan Kishan’s absence. Jayant Yadav makes way for Dhawal Kulkarni. They probably expect dew to play a big role. CSK as expected are unchanged.

CSK was looking good till 11th over and lost Moeen in the over bowled by Bumrah. In the next over, Faf and Raina got out. Minutes before Faf getting out, the official twitter handle of CSK wrote “faf du CONSISTENT!” to laud his back to back half centuries for team CSK.

As soon as tweet was uploaded, Faf got out trying to play a paddle sweep in a delivery off Pollard. Many asked the Twitter page to stop praising a batsman while he is batting as they believed that it is bringing jinx to them. “Status potiyaaa. Out aayiduvan” a fan said whereas another one said “Unnalaa enna panan mudiyumoo atha pannita”

Switch off the phone and watch the match, thats the biggest gift for CSK fans leo, please🤦‍♀️