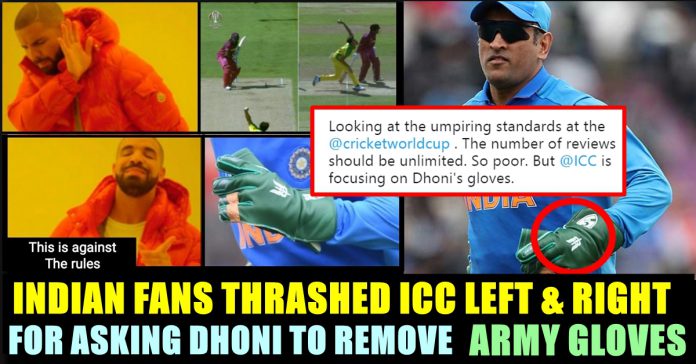 Indian middle order batsman and prominent wicketkeeper MS Dhoni professed his love for the Indian Army as he sported the regimental dagger insignia of the Indian Para Special Forces on his wicket-keeping gloves during the India vs South Africa match at The Oval on Wednesday. However, the ICC has not been quite impressed with Dhoni’s decision and requested him to remove the insignia from his gloves.

The ICC has communicated its decision to the Indian team management and said that Dhoni will face no penalty. “We have asked for it to be removed. (It’s a) breach of regulations. No penalty,” Furlong said.

Images of the “Balidaan Badge” on Dhoni’s wicket keeping gloves went viral on social media with quite a few Indian fans praising the World Cup-winner for his love towards the the Indian Para Special Forces.

Dhoni, an honorary Lieutenant Colonel with the Indian Territorial Army, has been sporting the Balidaan Badge on his gloves and caps for quite some time now.

This statement from ICC caused the trending of the hashtag #DhoniKeepTheGlove hashtag in twitter. Tweets under the hashtags are supporting Dhoni’s act and encourages him to wear it in further games.

Shame on #ICC……One small symbol of national pride too much for ICC? They asked dhoni to remove the gloves with army badge . Raise your support for MS Dhoni to bear the ‘Balidaan Badge’ on his gloves by using the hashtag #DhoniKeepTheGlove pic.twitter.com/6DJ4qRW2IE

I want all Indian players have Abhinandan style beard on India vs Pak matchday.#DhoniKeepTheGlove

#DhoniKeepTheGlove a Lot Col has all the rights to wear his badge #ICCWorldCup2019 it’s not disrupting any part of the game. Also if nike..Reebok and other brands can worn why not this?

The glove that @msdhoni wore was not related in politics . It had just balidaan badge for brave soldiers in the glove . ICC should allow it in international matches . #DhoniKeepTheGlove

What #ICC has to do with this. Better ICC concentrate on improvement of game, quality of umpires, making new rules. This is none of your business #DhoniKeepTheGlove

He is neither playing for you @ICC nor @BCCI He is playing for his country and has every right #DhoniKeepTheGlove pic.twitter.com/K8wdwomgSJ

How cool it is when MSD effects the stumpings with those Gloves 🔥!!

Looking at the umpiring standards at the @cricketworldcup . The number of reviews should be unlimited. So poor. But @ICC is focusing on Dhoni’s gloves.#DhoniKeepTheGlove

Hey @ICC, the symbol on the glove is neither religious nor racial. First reveal who the complainant is..

Also @ICC, that’s you in the picture, by the way. #DhoniKeepTheGlove pic.twitter.com/PzhqoSbg0T