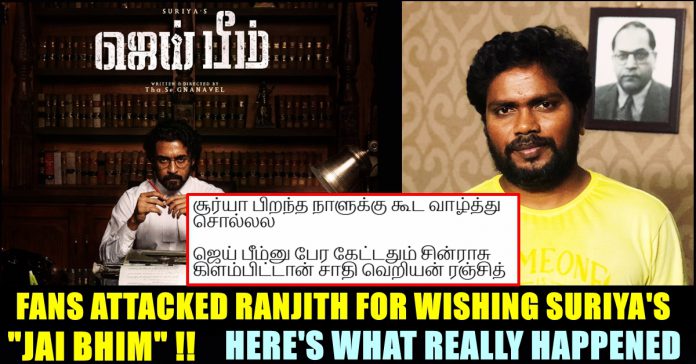 On the special occasion of Suriya’s 46th birthday, first look of one of his upcoming films “Jai Bhim” released and grabbed a top spot at the trending list in the social media platforms. In the film, Suriya plays the role of a lawyer and the makers have also released the second look of the film on the day which marks the lead actor’s birthday.

First look poster showed an intense Suriya donning the attire of a lawyer and a group of people who are suffering from poverty. Sharing the poster, Suriya wrote “Excited to share the First Look of JaiBhim #ஜெய்பீம்” and tagged the main casts, technicians of the film in his tweet.

The second look poster showed the actor as a lawyer sitting in his office amidst books, telephones and a type writing machine.

Jai Bhim which features Suriya in the lead role is directed by TS Gnanavel. The film is written by Manikandan, who will be acting in the film as well. The film is being produced under Suriya’s own production banner 2D Entertainment and this will be the fourth time the production house and Suriya are collaborating on a project.

Among the many who wished Suriya for his new project, director Pa. Ranjith who is known for following Dr. Ambedkar’s ideologies also wished by quoting the tweet of Suriya. He congratulated Suriya and team for the success of the project by writing “JaiBhim Vazthugal @Suriya_offl & team” in his tweet by adding happy emojis.

On seeing this tweet from Ranjith, many fans of the actor started attacking him in the comment section for not wishing Suriya for his birthday and for wishing him for the title release. Few also questioned why he didn’t wish for “Etharkum Thuninthavan” first look release. Check out some of the reactions below :

However, the real reason behind Ranjith wishing the film’s first look release is, that they filmmaker is some how connected to the title. Rajsekar Pandiyan, Director & Co-Producer of Suriya’s 2D Entertainment uploaded a tweet thanking Ranjith. It is highly believed that the filmmaker whose twitter handle name is “Bheemji” had provided the title that he already got registered, for the makers of Suriya starring “Jai Bhim”.

OFFICIALLY CONFIRMED : The Evicted Contestant Of This Week Leaked !! CHECK WHO !!

The most awaited Saturday's show of Bigg Boss completed telecasting successfully and Kamal Haasan surprised its audience by appearing with a clean shaved look...

Raiza Wilson conducted a chat session with her followers in her official Instagram account in which she talked about Bigg Boss season three title...