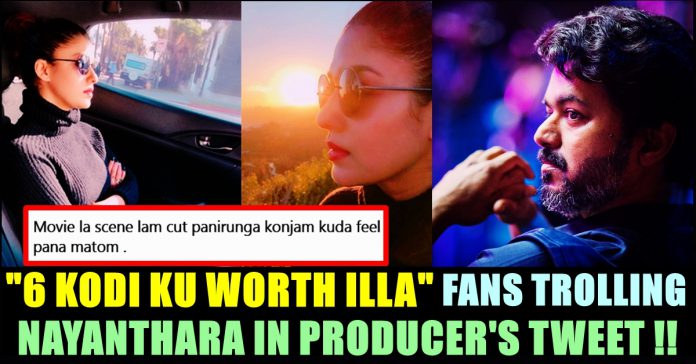 The makers of Vijay’s Bigil held a grand event for the audio launch of the upcoming Tamil film in Chennai on Thursday. Vijay essays the role of a coach of a women’s football team. Directed by Atlee, Bigil is set to hit theatres this Diwali.

All artists, technicians and the entire team of the film were in attendance. Vijay’s fans who eagerly look forward to the speech of their matinee idol at such events, worked full time to ensure that the hashtag ‘Vijay’s speech’ was one of the top India trends on Twitter, Thursday evening.

However, lead lady of the film who is fondly called as “Lady Super Star” by her fans missed the launch for some personal reasons. At the grand event, Vijay also spoke about his co-star Nayanthara and how he is proud of her. He said, “This is my third film with Nayanthara including Sivakasi. You must have seen the song Kodambakam Area from the film. The song basically says that she has won hearts in all areas and it’s true. There are women who struggle to win and there’s Nayanthara who has won after all the struggles. I’m proud to work with her.”

Archana Kalpathi, producer of the movie, also thanked Nayanthara in her official twitter account for becoming a family member of AGS. Her tweet read as “A special thank you to #Nayanthara who is already a part of the #Ags family. Thank u for everything ♥️😘 #Bigil”

A special thank you to #Nayanthara who is already a part of the #Ags family. Thank u for everything ♥️😘 #Bigil

However, followers of her and fans of Vijay asked Archana, not to praise Nayanthara by accusing her that she deliberately avoided the audio launch. Check out some of their reactions here :

She is celebrating with his boyfriend @VigneshShivN birthday❤❤❤…
She know well about this #bigil audio launch😜😜😜…
She is lady superb star. So she may not come for small functions❤😍

She is not deserved #ThalapathyVIJAY 's speech & words like ARAMM!
Its really an over dose to her!
Atleast she should have released a press note for to clarify!
Worst ever to do these things in biggies film!!#BigilAudioLaunchOnSunTV #BigilAudioLaunch #Bigil

Nayan over attitude.. I hope this is her last movie with #Thalapathy

What do you think on these comments of Vijay fans ?? Let us know !!