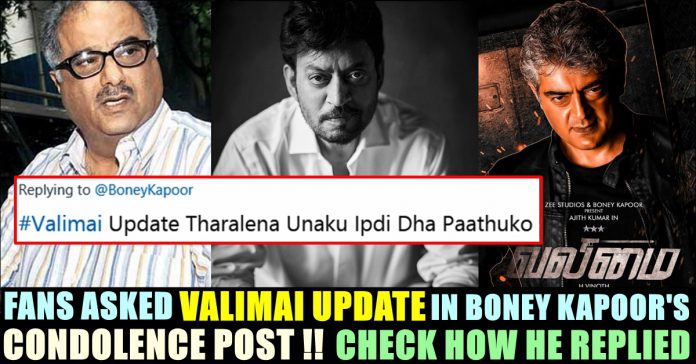 Due to the corona outbreak, the entire country is is complete lockdown for the past one month for the first time in human history. Daily routines of people affected in big time as the number of positive cases are increasing in daily manner. Many Entrepreneurs, Industrialists, Merchants are facing crisis financially as travels are restricted across the country. Cinema industry is no exception as shootings of all the movies are stopped with no further notification.

However, ardent fans of particular actors couldn’t keep themselves calm at this pandemic as their plans for celebration also got ruined. “Master” which was supposed to get a theatrical release on 9th of April got postponed. Vikram’s Cobra, makers of which released their first look recently forced to reach India while they are shooting in a foreign location. Surya’s Soorarai Pottru and Ajith’s Valimai are also facing similar problems in the production of their films due to the corona crisis. However, few internet users are demanding for a trailer at least from the directors and producers of their favourite hero’s films.

When one of a fan asked Cobra’s director Ajay Gnanamuthu to release the teaser of the film on Vikram’s birthday, he said “Not possible!! All studios closed!! Will take a long time”

Not possible!! All studios closed!! Will take a long time 😒

Now, few over enthusiastic fans asked update to Producer Boney Kapoor about his upcoming film “Valimai”. The most saddest part of it is, they asked him for an update about “Valimai” in his condolence post regarding actor Irrfan Khan’s demise. The 54 year old actor died on 29th of April due to colon infection which shattered the entire Indian film industry.

“We have lost one of the finest Actor. He fought till the very end. Irrfan Khan you shall always be missed. Condolences to the Family.” read his tweet about Irrfan.

We have lost one of the finest Actor. He fought till the very end. Irrfan Khan you shall always be missed. Condolences to the Family. #IrrfanKhan #RestInPeace

Though many fans of actor Ajith Kumar asked their fellow fans not to ask update about “Valimai” in this post, one of them said “You have to face the same if you fail to give update” where as another one wrote “So sad, but I want Valimai update…”

So sad, but I want Valimai update…

Now, in a way of replying to them all, Boney Kapoor released a press note saying that all the production activities and advertisements of his upcoming movies are stopped due to the deadly virus COVID 19 after discussing about it with the actors and technicians of his upcoming movies. “Till that let us follow social distancing and let us protect ourselves” he said in his statement.

Valimai, directed by Vinoth Kumar was expected to release on Diwali. Shooting of the film took place in various places of Chennai before Corona crisis. Boney Kapoor who directed Ajith’s Nerkonda Parvai is also producing this film. Comment your views on this response made by the producer !!

A twenty-four-year-old woman from Ariyalur in Tamil Nadu has committed suicide after she was scolded for spending too much time on TikTok video app....