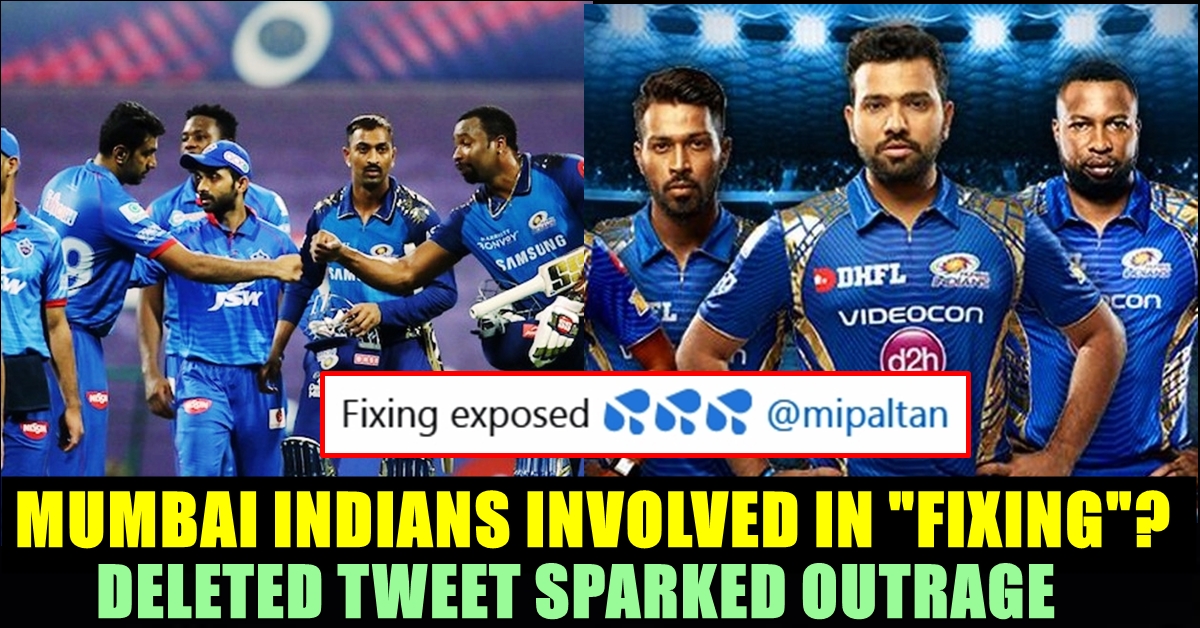 Mumbai Indians effortlessly won Delhi capitals and climbed to the top spot of the points table with 10 points. Chasing 163 runs, Suryakumar Yadav hammered a fiery fifty but was dismissed by Kagiso Radada for 53. Quinton de Kock fell to R Ashwin. Rohit Sharma was dismissed early on by Axar Patel. However, the team successfully chased 163 runs in the last over when Pollard and Krunal were in the middle.

Social media handles of IPL team being active when their teams are playing match is common. They will be updating about the team scores, fall of wickets with captions that favours their team. Now, one such tweet from the official twitter handle of Mumbai indians IPL team had sparked a huge controversy. The now-deleted tweet showed the score of Delhi capitals prior the team starting the innings. Surprisingly, Delhi almost scored the same score which left netizens in utter shock.

The social media handle of Mumbai Indians team enjoys 58 lakh followers. Winning the tournament for three times, the Rohit Sharma led team often termed as a “fixing team” by a separate set of followers due to a “no-ball” controversy. They would accuse the team owners of buying umpires during crucial matches. Now, this deleted tweet has added fuel to the trollers of the blue team.

Exactly at 7 : 38 PM on the match day, the social media handle of Mumbai Indians posted a tweet saying “Pattinson is sharing the new ball with boult”. Followed by that the one who wrote the tweet added “DC – 163/5 (19.5)”

At that time, openers of the DC team were just finished playing their first over. Surprisingly, the team ended up scoring 162 runs in 20 overs by losing 4 wickets. Though the numbers are not matching accurately, fans started questioning why the tweet was deleted and why it was posted in the first place.

Here’s how much Delhi scored at the end of the innings :

These two screenshots are doing rounds since it was surfaced in the official twitter handle of Mumbai Indians. However, Mumbai fans are defending their favourite team, saying that they only mentioned the score of Rajasthan Royals who played the previous match against Sunrisers.