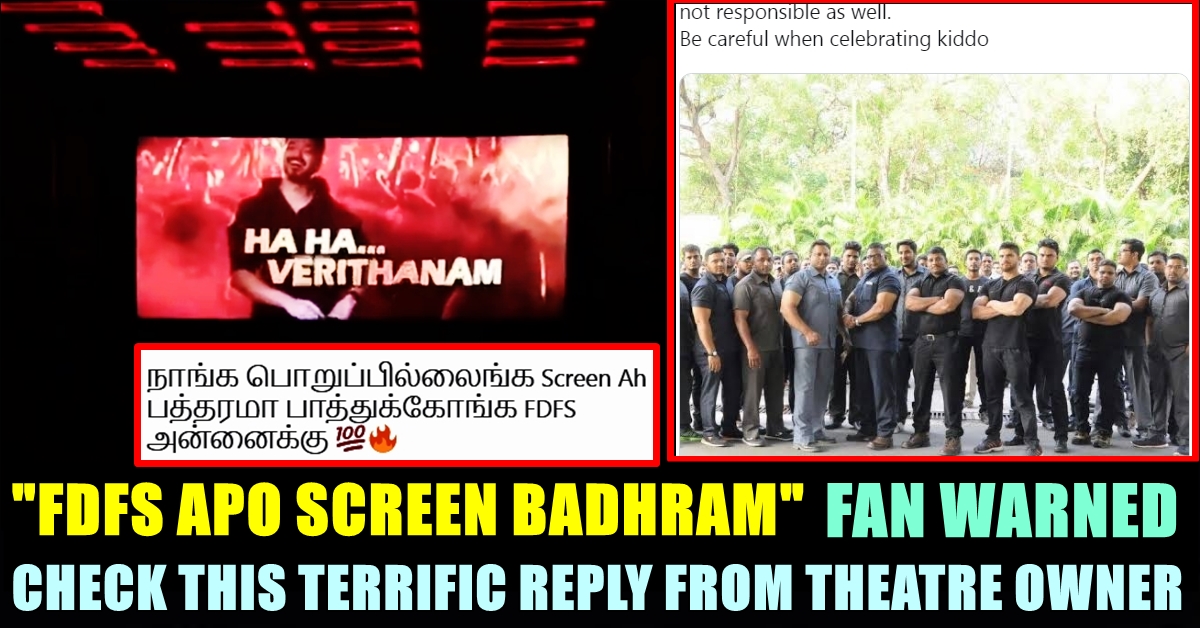 Bigil, one of the most anticipated film of the year, is expected to release on Festival day of Diwali. The audio launch which took place recently added fuel to the anticipation of fans. Vijay, the lead of the movie is the only reason for all these noise which we all know. The film is based on women’s football and is touted to speak highly of women and freedom.

Directed by Atlee, the film is produced Kalpathi S. Aghoram under the banner AGS Entertainment. The movie has Nayanthara as the female lead. Vivek, Anand Raj, Daniel Balaji, Jackie Sheroff, Yogi Babu, Kathir are also part of the ensemble cast. The soundtrack and background score was composed by A. R. Rahman, marking his second collaboration with Atlee after Mersal, and also his fifth collaboration with Vijay.

Not only fans, even theatre owner are very much excited for the release of this mega budget film as it is expected to break all the box office records of Vijay’s previous movies. Official twitter handle of popular theatre, Ram Muthuram Cinemas which is located in Tirunelvel posted a lyrical video of Bigil song playing in their theatre. They posted it with a hashtag which said Bigil in Ram cinemas.

To this tweet, one of a fan of actor Vijay, in a lighter tone, to express his excitement asked the Theatre owner to keep his theatre screen safe on the day of the first day first show of Bigil. “நாங்க பொறுப்பில்லைங்க Screen Ah பத்தரமா பாத்துக்கோங்க FDFS அன்னைக்கு 💯🔥” he wrote in his tweet.

But the fan didn’t expect what is coming next it seems. The theatre owner who is very much active on twitter replied with a similar warning. He said that he wants everyone to celebrate but he disliked the combination of word the fan used to express his excitement. He posted a picture of his bouncers who are going to guard the theatre for the first day first show and said that he is not responsible too.

The tweet of Ram Cinemas read as “See brother we want you all to celebrate but even for joke words like this straight to an theatre owner is not good. As you say you’re not responsible, I say the same, we’re not responsible as well. Be careful when celebrating kiddo”

Check out the the reply here :

See brother we want you all to celebrate but even for joke words like this straight to an theatre owner is not good.
As you say you're not responsible, I say the same, we're not responsible as well.
Be careful when celebrating kiddo pic.twitter.com/Vp7JZ00FW5

This reply received many reactions from the users of twitter. Check out some of them here :

What do you think on this terrific reply ?? Comment your views !!

Controversial Actress Blamed Sherin For Tharshan’s Eviction !! Check What She Has To Say !!
These Stars Couldn’t Believe That Tharshan Got Evicted !! Check What They Have To Say !!