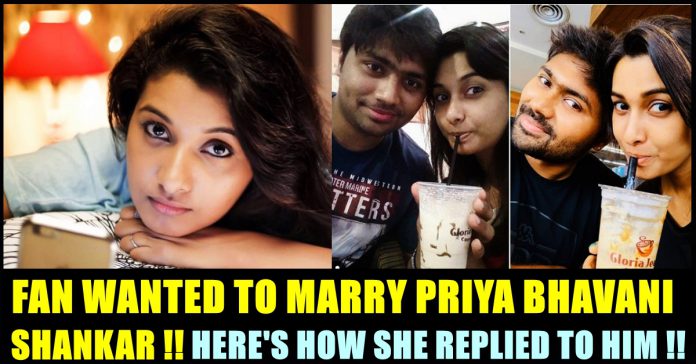 Tamil actress Priya Bhavani Shankar who is pretty much active in social media platforms nowadays, conducted a question and answer session with her Instagram followers on Tuesday. She who answered to many of the questions asked by her fans, gave a cheeky reply to one of them who asked her to tell him the procedure of how to marry her. The actress who made it public about her relationship way earlier, said that it is too complicated for someone new now. Priya also answered to many other questions such as “her belief in love at first sight”, “her view about LGBTQ community” etc.

Priya Bhavani Shankar made her entry into media industry as a Television News presenter in Tamil Puthiya Thalaimurai News Channel. She became very popular after started acting in serial named “Kalyanam Mudhal Kadhal Varai” which got telecasted in Star Vijay Television. She began her career as a software engineer at Infosys, after completing her Bachelor’s Degree in Electronics and Instrumentation Engineering from B.S. Abdur Rahman Crescent Institute of Science and Technology. After entering the media industry she did her Master of Business Administration.

After making her debut as heroine in “Meyadha Maan”, Priya became one of the busiest actresses in Kollywood. It is very well known that Priya Bhavani Shankar is committed to her long time boyfriend Raja vel. The actress has been uploading the pictures of themselves together every now and then. Now, in the recent question and answer session, a follower asked “What is the procedure to marry you?” with heart emojis.

Replying to them, the actress said “I’m way too complicated for someone new, it’s better and safe if you don’t know the procedure” by adding “laugh” emoji. Check out the screen shot of her reply below :

Priya and Rajavel are involved in a romantic relationship for 10 long years, according to reports. Check out some of their pictures together below :

Check out some of the other replies of Priya below :

The actress who gained many fan pages in social media platforms in a very short span, has a separate set of fan following for her acting and screen presence. So far she paired up with Vaibhav, Karthi, SJ Surya and Arun vijay. On the work front, she is expected to be seen in Indian 2, Oh Manapenne, Kuruthi aattam, Bommai and Kasada Thabara.

Previous articleRJ Ananthi’s Interpretation On How “Book Reading” Impacted Her Life Caused Debate In Twitter !!
Next articleBlack Sheep In Trouble For Honouring “Toxic” Madan With An Award ?? WATCH

Emerging cricketer Venkatesh Iyer who is currently representing Kolkata Knight Riders team, grabbed wide attention from the fans after dropping a comment on one...

The stars of Kollywood gathered in Chennai for one of the biggest award shows in south film industry, the 10th edition of Vijay Awards...