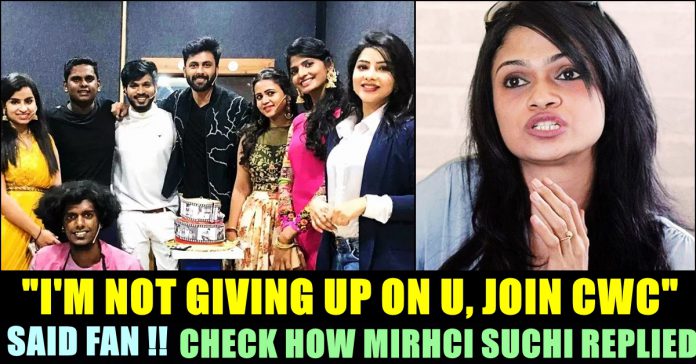 After her Bigg Boss stint, Mirchi Suchi is pretty much active in social media platforms and is busy on concentrating her singing. Most recently, a follower expressed his/her wish of seeing her in the upcoming season of “Cooku with Comali” show and the singer’s reply has grabbed the attention of the Internet users.

Suchithra who entered the fourth season of Bigg Boss show as a “wildcard entrant”, spent three weeks inside the house. While getting evicted, Suchithra said to Kamal Haasan that her father appeared in her dreams and told her to get out of the house as nothing about her were telecasted. She also expressed her fear of mass trolls and criticisms in social media. Comparing to other contestants, Suchithra had a very short span of time to grab a spot in the hearts of the audience and failed to do it. Suchithra got nominated for the eviction with 9 votes from the housemates.

During her final conversation with Kamal Haasan before walking out of the show, Suchi said that Bigg Boss is her most favourite show and added that she entered the house as a fan girl. The radio jockey also said that she wanted to get her singing career back by participating in the show.

Most recently, she uploaded a throw back picture of herself working as a radio jockey and added a caption saying “Circa 2002 🌺 Radio – someone still loves you 💖”

Replying to this post, a follower named “Anxious me” dropped a comment expressing his wish of seeing the actress in “Cooku with Comali season 3”. “Please go to cooku with comali season 3. I’m not giving up on you.”

Suchi immediately asked him to give up on her without even considering the idea of participating in “Cooku with Comali” show. She wrote “if that’s your vision for me then please give up on me 😄”

Cooku with Comali is one of the most celebrated shows in recent times, contestants of which are garnering immense love from the Television and Internet audience. Comment your views on this reply of Suchi !!

Previous article“Don’t Compare Me With Sivaangi” – TV Actress Neha Of “Bakkiya Lakshmi” Fame Replied To Insta Users
Next articleFans Trolled Afridi For His Tweet About IPL !!

The shooting of Thalapathy Vijay's 64th film is being progressed in full swing. A sum of talented and high profile actors including Andrea, Shanthanu,...

The most awaited release of Vikram's trailer and audio happened in the evening of Sunday and raised the expectation level of audience to another...