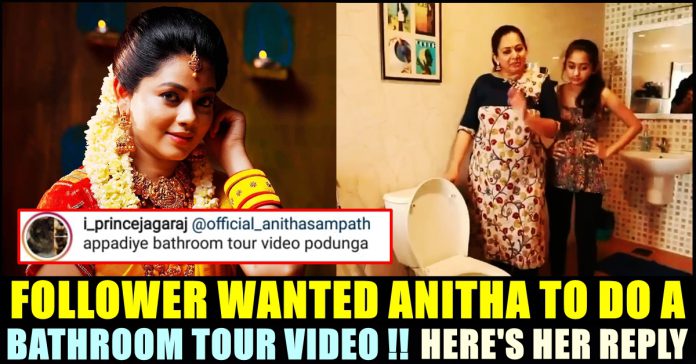 Bigg Boss fame Anitha Sampath replied to a follower of her Instagram handle who wanted her to do “Bathroom” tour. She who is pretty much interactive with her followers, said that there is only a bucket and mug in her bathroom in a humorous manner. Anitha Sampath who rose to fame among mainstream audience through her Bigg Boss stint, is currently busy uploading videos in her youtube channel “Anitha Sampath Vlogs”. Through the channel, the actress is updating her subscribers about her life style, Bigg Boss experience, upcoming works etc.

Anitha Sampath, a news reader by profession, is currently running a youtube channel. She is very much involved in interacting with her followers by answering to their questions regarding the reality game show, her personal life etc. Ever since coming out of the house, the actress is facing so much abuse and hate from the users of Instagram. She also exposed a number of abusers and people who sent inappropriate texts to her in Instagram through fake ids in social media. Currently, she is participating in BB Jodigal show that is being telecasted in Vijay Television.

In the new dance show, male and female contestants of Bigg Boss show could be seen pairing up with each other to grab the title. Vanitha Vijayakumar- Suresh Chakravarthy, Gabriella Charlton-Ajeedh Khalique, Aranthangi Nisha-Dhaadi Balaji, Anitha Sampath-Shariq Haasan, Julie-Sendrayan, Samyuktha Karthik-Jithan Ramesh, Fathima Babu- Mohan Vaidhya are the pairs for the show judges of which are actor Nakkhul and Ramya Krishnan. Anitha, after making a vlog out of the shooting of “BB Jodigal”, shared a post in her Instagram promoting it.

“hey guys! hope you enjoyed our dance yesterday! just made a vlog of the shoot day in our youtube channel #anitha_sampath_vlogs .link in story” read her caption for the post.

Reacting to this post of her, a follower asked Anitha to do a “bathroom tour” for her youtube channel. Recently, another Bigg Boss follower Archana Chandhoke uploaded a video in her youtube “Wow Life” titled “Wow Life Presents “Achuma’s Bathroom Tour” Enga Veettu Bathroom ft. Archana & Zaara” which showed the Mother and Daughter duo showing their bathroom to their followers. The video garnered huge response from the followers of the youtube channel which is evident through the number of likes and reactions. So far, the video has garnered 4 million plus views.

Followed by the wide reach, the video also received trolls and hatred from the followers and the other content creators of youtube space. They trolled Archana for making a content out of her house’s bathroom. Replying to the request of the follower, Anitha Sampath said “oru bucket oru mug matum dhan iruku . . “