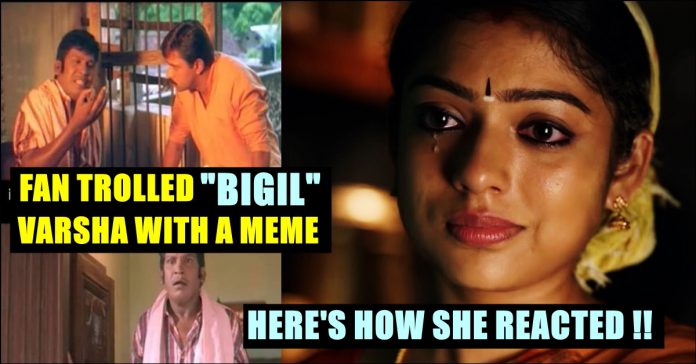 Apart from Vijay, Nayanthara and Jackie Sheroff, the film also had 11 girls as football players. Indhuja Ravichander, Amritha Iyer, Varsha Bollamma are few of them who grabbed the attention of the audience. Meanwhile one of a fan trolled Varsha with a Vadivelu meme template from his movie “Giri”.

This reply of Varsha received as many as 15 K likes and fans stormed into her comment section to express their opinions. Check out some of their reactions below :

Bigil starring Thalapathy Vijay has appeared to be a juggernaut at the box office, with its total collection touching Rs 200 crore in four days. Helmed by Atlee, Bigil has collected over Rs 85 crore in Tamil Nadu alone.

What do you think on this reaction of Varsha ?? Comment your views !!

Previous articleThis Bigg Boss Celebrity Asked His Fans Not To Celebrate His Birthday Due To Sujith’s Death !! Got Trolled !!
Next articlePopular TV Actor Kumaran Shedding Tears For Sujith On Air !! WATCH !!

After complaining about a restaurant named Moonlight to Swiggy online food delivery platform, the actress came up with a series of stories condemning the...

The makers of Vijay’s Bigil held a grand event for the audio launch of the upcoming Tamil film in Chennai on Thursday. The launch...