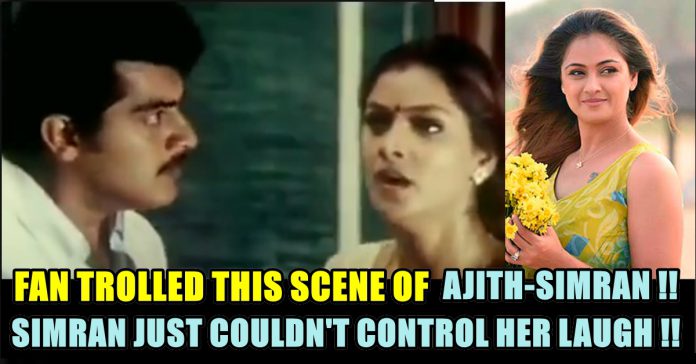 Fan Trolled This Scene Of Simran With Ajith Hilariously !! Simran Just Couldn’t Control Herself From Laughing !!

Simran, a popular actress in the Tamil film industry from the late 90s and early 2000s, is likely to be paired opposite Rajinikanth in the film. Talks have been initiated and the actress will be seen playing Rajinikanth’s wife. Simran has also completed her portions in Sivakarthikeyan’s rural family entertainer Seema Raja and Chiyaan Vikram’s spy action thriller Dhruva Natchathiram.

In her heydays, Simran shared screen space with top actors like Kamal Haasan, Vijayakanth, Sarathkumar, Vijay, Suriya, and Ajith but for some reason, she didn’t get a chance to act with Superstar Rajinikanth which is fortunately now happening for her.

Starting off as a television anchor to later achieving superstardom in films, actress Simran has come a long way. In a career spanning more than two decades, Simran has everything to her credit. Over the years, Simran has been equally appreciated both for her performance-oriented films and glamorous roles. She is one of the few actresses who had made a successful career in other industries as well.

In 1999, she was featured in Forbes Magazine as the most prolific actress with a diverse portfolio from the Indian subcontinent. Well noted for her dancing and acting skills in the Indian film industry, she won three Filmfare Awards South including Best Female Debut for Once More, V.I.P and Nerukku Ner, one Tamil Nadu State Film Award For Best Actress for Thullatha Manamum Thullum three Cinema Express Awards and was awarded the Kalaimamani award in 2003. Being one of the actress who is very much active in Twitter, to our surprise Simran shared a meme made on her in her official twitter account and wrote “This just cracked me up….LOL”

Its funny how Ajith fans are seeing this as a troll on Ajith and are posting similar videos featuring Vijay. Yov, no one is trolled here da nonaigala… Its a funny edit and actually a nice one and to bring a smile.

Every follower of her enjoyed the meme and laughed for it in her comment section. What do you think ?? Do you find it funny ?? Let us know !!

Previous articleRithvika Slams Mumtaz For Being So Selfish & Adamant !! Watch Video !!
Next articleActor Karthick Got Trolled Brutally For Announcing His “Re-Entry” Into TN Politics !!