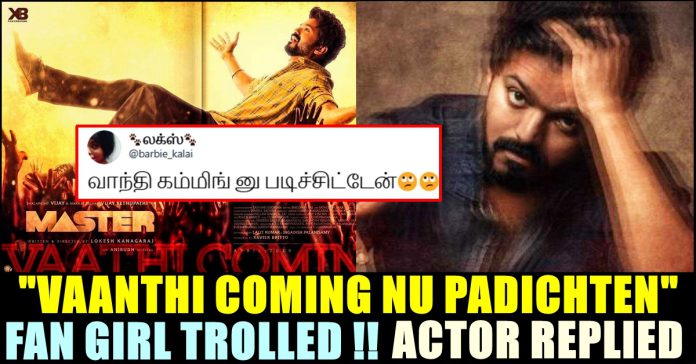 The makers of Master made an important announcement on the evening of Monday about the second single of the film. The song which is dubbed as “Vaathi Coming”, is going to release on the 5 pm of Tuesday. The song is going to release ahead of the audio launch event which is scheduled for next week. Sharing a specially made poster, Anirudh Ravichander who composed music for the film wrote “Students! Vaathi is coming! Kuthu dance poda readyaa Students! Vaathi is coming! Kuthu dance poda readyaa VaathiComing second single from #Master tomorrow at 5 pm Master Second Single #Master“

As soon as the announcement surfaced, many hashtags such as “Vaathi Coming”, “Master Second Single” started trending in the micro blogging social media site. In a way of reminding the fans about the arrival of the second single, actor Shanthanu who is going to be seen in the film along with Vijay posted a tweet during the noon of Tuesday.

Though this tweet widely shared by the fans of actor vijay, one of a fan girl of actor Ajithkumar made fun of it by commenting that she read “Vaathi” and “Vaanthi” which means “Vomit”.

This tweet grabbed the attention of Shanthanu himself who took time to reply for the fan girl of actor Ajith. Shanthanu wrote “I think your very disturbed in life ! Pls tc”

I think your very disturbed in life ! Pls tc

The emerging actor who is very much interactive with his followers in Twitter, recently happened to tick one of a main box in his bucket list which is sharing screen space with Thalapathy Vijay. He got the opportunity to act in “Master” along with Vijay which is being directed by Lokesh Kanagaraj. Shanthanu is very much known for having friendly conversations with his followers in Twitter. He directly answered to many of their questions, including to the one on how he missed the opportunity of acting Subramaniyapuram at the initial stage of his acting career.

This reply comment from Shanthanu gained him more likes and positive replies from the fans of actor Vijay. Many of them asked the actor to ignore negativity as Thalapathy said. As far as Master is concerned, the film is expected to hit the screens the 9th of April. The teaser of the film is rumoured to get release 20 days prior the movie’s release.