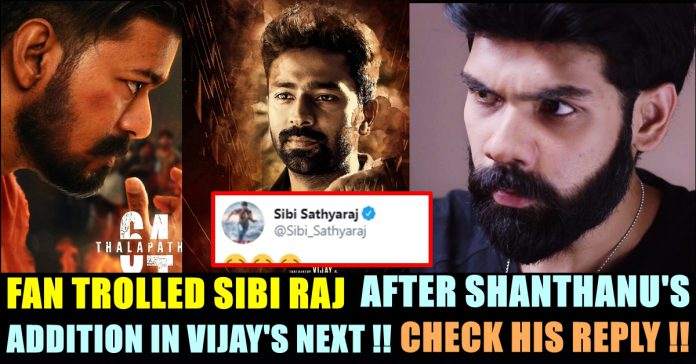 Thalapathy 64 has commenced with a customary pooja in Chennai with Vijay, Vijay Sethupathi, Malavika Mohanan and Shanthanu Bhagyaraj and the rest of the crew in attendance. Directed by Lokesh Kanagaraj, the film is touted to be a gangster flick with Vijay Sethupathi playing the villain.

Lokesh Kanagaraj who is considered as one of the new age filmmakers is keen on selecting young talents as his crew for this film it seems. Music to be composed by Anirudh Ravichander, Lokesh casted Angamaly Dairies fame Antony Varghese, Shanthanu for this upcoming action thriller.

Shanthanu who is super excited to share screen space with his most favourite actor Vijay, is super active in social media platform. Meanwhile, one of a twitter user posted a meme of Vadivelu from a famous template of “Kuselan” movie.

The meme shows, Shanthanu frustrating actor Sibiraj for bagging a role in Thalapathy 64. The user who added the caption, in his tweet wrote “annas just i saw the meme..i can’t controlled laughing…😆😆 Semaya yosikuranga..💆‍♂️💆‍♂️ Congrats @imKBRshanthnu na❤❤.. @Sibi_Sathyaraj we are waiting for your momentum…”

As the twitter user mentioned Sibiraj in his tweet, the actor who happened to see it, couldn’t restrain himself from reacting to it. When we are expecting him to ask the user not to create such memes, the actor took it sportively and acknowledged the tweet by reacting to it with laughing emojis.

Check out his reaction below :

Unlike his other tweets, this reply from the actor reached widely as many as more than 9000 likes so far. Reactions are to him reply were also hilarious to the core. Check out some of them below :

Sibiraj was last seen in a mystery action thriller Sathya which was appreciated by those who watched it. One of the most notable film sof his career is Naigal Jakkirathai, t film, which Sibi reportedly accepted after having listening to more than 200 scripts. Some of his other notable films are Pokkiri Raja, Jackson Durai, Kattappavae Kaanom etc.

What do you think on the way Sibi approached this meme ?? Comment your views !!