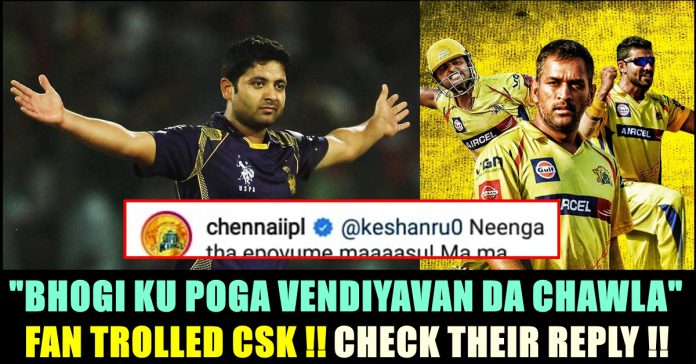 Very own fans of Chennai Super Kings are not happy with the decision took by the franchise in the bid that took place on 19th of December. They bought leg spinner Piyush Chawla for a whopping price of 6.5 crores rupees. Many fans couldn’t find the reason behind the purchase as the team already has three spinners Harbhajan Singh, Imran Tahir, Karan Sharma along with batting allrounder Suresh Raina.

However, fans not convinced and are making fun with the decision made by the team management. Meanwhile Chennai Super Kings posted a picture in its official Instagram account announcing that they bought Sai Kishore, a Tamilnadu based bowler. Check out their post below :

In this post, one of a fan who couldn’t resist himself from expressing his frustration on buying Piyush Chawla, explained a possible scenario which could happen in the future. In his reply comment, “Chawla must have scrapped during previous year’s Bhogi itself. Why you bought him ? You will buy him easily but it is me who has to face three Mumbai Indians fans in our whatsapp group which consists only four of us. Answer me admin. Who is capable of selecting players ?? Me or those who involved in auction ?” he asked.

This comment grabbed the attention of the official Instagram account of Team CSK. They replied to the fan by accepting that fans are always “Mass”. Their reply said “Neenga tha epovume maaaasu! Ma ma maaaasu! :)”

However, as we all know, the social media handles of the team has nothing to do with the decisions being taken by management. There is more than 100 days left for the most awaited thirteenth edition of Indian Premier League but fans are already in the mood it seems. It is very well known that IPL is the most watched Twenty 20 league in the world. Fans of the respective teams of the tournament are already started fighting with each other in social media platforms.

What do you think on this reply of CSK ?? Comment your views below !!

Among the genuine request from the Twitter users to Sonu Sood, there are few miscreants being active only to get attention which results in...

Less than a month after a woman Superintendent of Police filed a complaint against the Joint Director of the Directorate of Vigilance and Anti-Corruption...