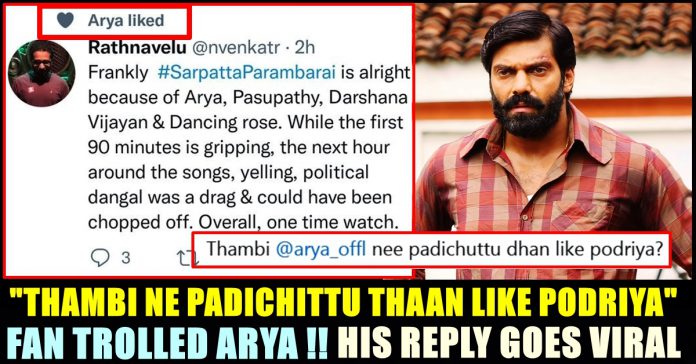 Arya reacted to a tweet of a fan who trolled him for “liking” all the tweets that are being posted about his recently released “Sarpatta Parambarai” film. On seeing the actor clicking “heart” for a tweet which criticized the Pa. Ranjith directorial, the user tagged Arya and questioned about it. To our surprise, Arya who got notified in the micro blogging social media site, replied to him and the reply tweet has garnered a huge reception. It is notable that Arya has been “liking” and “retweeting” almost all the recreations that are being made with the dialogues of “Sarpatta Parambarai”.

With majority number of positive reviews, the film “Sarpatta Parambarai” is being widely watched by the fans across the globe. Characterizations and Castings are being highly lauded by the audience and critics. The film is also being appreciated for its art work as many could be seen lauding the period drama for bringing the mid 70s in front of their eyes.

Ever since the film got released on “Amazon Prime”, Arya is pretty much active in Twitter and has been promoting the film by sharing tweets which are being posted about it. Recently, the actor “liked” the tweet of a fan who said that the film is an “one time watchable” and criticized the film’s pace in the second half.

“Frankly #SarpattaParambarai is alright because of Arya, Pasupathy, Darshana Vijayan & Dancing rose. While the first 90 minutes is gripping, the next hour around the songs, yelling, political dangal was a drag & could have been chopped off. Overall, one time watch.” read the user’s review for the film and the lead actor of the film, to our surprise, “Liked” the tweet.

On seeing the Twitter activity of Arya, a user tagged Arya and asked him whether he is reading the tweets or not. “Thambi @arya_offl nee padichuttu dhan like podriya?” his tweet read.

The tweet garnered 3k plus likes with hundreds of retweets. “He’s someone who appreciates everyone even the audiences. I made a reply review about Meegaman on reviewer Prashant’s page and Arya liked it. Never seen a celebrity who’s this much active in Social media. Epdi bro life uh balance panringa? Need to learn more from you.” read a follower’s tweet. Check out some of such reactions below :

He's someone who appreciates everyone even the audiences. I made a reply review about Meegaman on @itisprashanth page and @arya_offl liked it. Never seen a celebrity who's this much active in Social media. Epdi bro life uh balance panringa? Need to learn more from you. 😜

Can't see a more down to earth man like you arya.
Stay bless ! 🙏

Good to see this bloke respect others view. Live and let live.