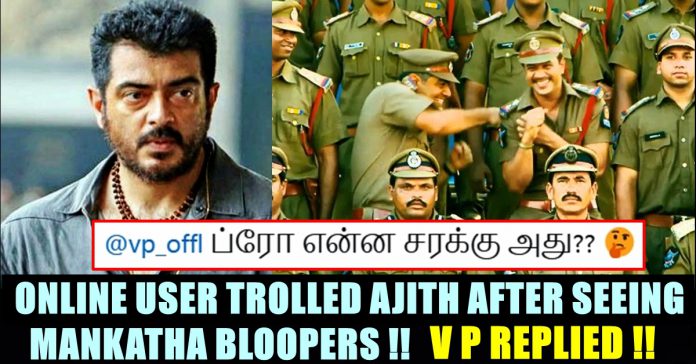 “Mankatha” of actor Ajith kumar and Venkat Prabhu is one of the path breaking heist film in the history of Tamil cinema. The 50th film of “Thala” impressed his fans like never before and his George Clooney alike salt and pepper look became a trend in the Kollywood industry. Apart from Ajith’s unique characterization, the film’s intriguing screenplay with ensemble cast also worked well among the audience and everything fell in right place for the film to become a huge hit in the career of Ajith kumar.

Now, after 10 years of the film’s release, sharing a clip from the blooper of the film, a twitter user asked director Venkat Prabhu what brand of alcohol the actor consumed to act that way. The filmmaker’s reply is going viral in social media platforms with Ajith fans lauding Venkat Prabhu for the way he handled the troller.

Blooper of “Mankatha” film has a separate fan base as audience witnessed a “never seen before” Ajith kumar in it. The actor who could be seen pranking his co starts throughout, would dance in a mischievous way while posing for a group photo with actor Ajith Kumar.

Now, sharing the particular part from the blooper video, a fan, in a way of trolling actor Ajith kumar asked what brand of alcohol he consumed before the shooting of the scene. “Bro what brand of alcohol it is ?” the follower asked by tagging the official twitter account of director Venkat Prabhu.

Venkat Prabhu who saw this tweet of the user, instead of losing his nerves or fuming at him, replied in a subtle way saying that it is a brand called “Love” by adding a smiling emoji. The filmmaker also added a hashtag which said “My Dear Thala”.

This cool reply of the “Maanadu” maker garnered huge reception among the fans of actor Ajith who started pouring love towards him in the comment section of his tweet. They are started requesting him to make the sequel of blockbuster “Mankatha”.

Due to the constant rainfall in the city, the Chembarambakkam lake, located about 25 km from Chennai, has touched a storage level of 2,781...