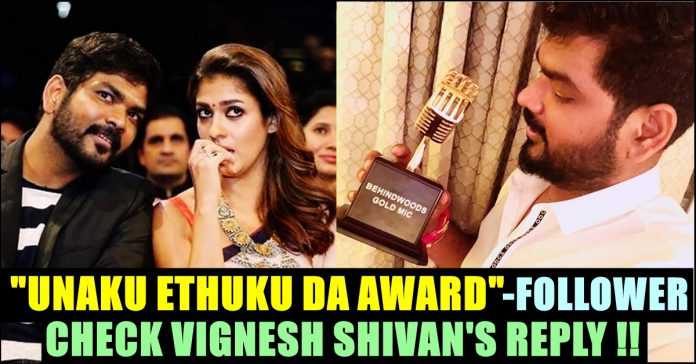 Vignesh Shivan who rose to fame among Tamil audience through directing films like Naanum Rowdy Thaan and Thaana Serntha Kootam is all set to direct his fourth film by having Sivakarthikeyan in the lead which is tentatively titled as SK 17.

He is one of the many filmmakers who are very much active on social media, especially in Instagram. The filmmaker is also known for penning lyrics for Tamil songs. Having written songs for many films, he received an award as best lyricist in Behindwoods Golden Mic Awards lately. He received award for a song written in his own film Thaana Serntha Koottam which was released in 2018.

Vignesh who hardly misses to post his daily routines, shared a picture of himself posing with the award he received to his 7 Lakh instagram followers. Thank you @behindwoodsofficial for the encouragement & acknowledgment 😇😇🥳🥳🥳 #lyrics #writing #life #grateful #tsk #songwriting #music #behindwoods #goldenmic #newage #lyricist The Poda Podi director added in his caption.

To this post, one of his follower tried to troll Vignesh Shivan by asking him for what he is receiving an award. The comment from the user was not in good taste as it contained no respect in it. “Ethuku da unaku??” the user asked to which Vignesh Shivan politely answered by saying that it is for some lyrics. Follower Trolled Vignesh Shivan For His Selfie !! You Must See How The Director Reacted !!

Generally celebrities who are facing such hatred would avoid such these kind of questions. But thus humble reply from Vignesh received many accolades from his own followers which is evident through the reply comments.

There have been unconfirmed reports that Nayanthara and Vignesh Shivan might get married sometime next year. But, the couple is still yet to admit their relationship in public. They met each other on the sets of Naanum Rowdy Dhan in 2015 and fell in love with each other.

At an award function last year, Nayanthara called Vignesh Shivan her fiance. The filmmaker never shies away from posting cosy pictures of the two on his personal Instagram profile.

What do you think on the way Vignesh Shivan handled the troller ?? Comment your views !!

A 45-year-old woman has been arrested for allegedly molesting her friend’s son, a 11-year-old- boy. She was arrested by the cops from Bandra (West). According...

A B.com graduate named Suresh who was trying to go to abroad for his occupation, committed suicide due to Rummy addiction. Suresh who belongs...