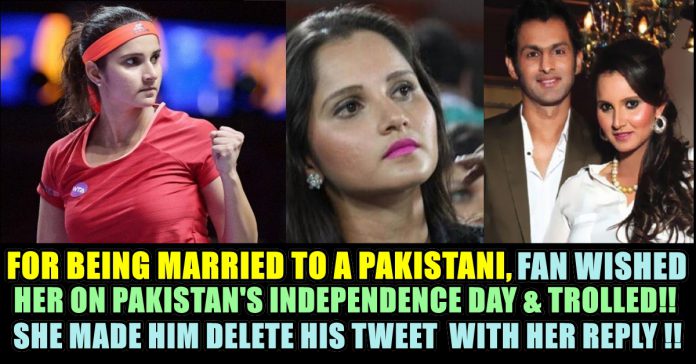 Ever since India’s tennis star Sania Mirza married Pakistan cricketer Shoaib Malik, her nationality has been constantly questioned by fans and trolls on social media. The 31-year old gave a befitting reply to a troll who asked her if her Independence day fell on Tuesday, the day Pakistan celebrates.

Sania was quick to respond, giving a befitting reply to the troll saying, “Jee nahi.. mera aur mere country ka Independence Day kal hai, aur mere husband aur unnki country ka aaj!! (No. My country and my Independence Day is tomorrow while my husband and his country’s is today!) Hope your confusion is cleared!! Waise aapka kab hai?? (When is yours?) Since you seem very confused..” Sania is expecting her first child with Shoaib Malik. In a recent interview on Hindustan Times Brunch, Sania said, “A lot of people have this notion that Shoaib and I got married to unite the two countries. That is not true. Whenever I have been to Pakistan – and I go once every year to meet my in laws – the love that I get there is immense. The whole country calls me ‘bhabhi’, and they give me so much respect.” “I also know that that love is not necessarily for me, it is for my husband who has been cricket captain and what he means to everyone there. The respect they have for him transcends to the respect for me… Just like when Shoaib comes here, and he gets the love and respect of our countrymen,” she added.