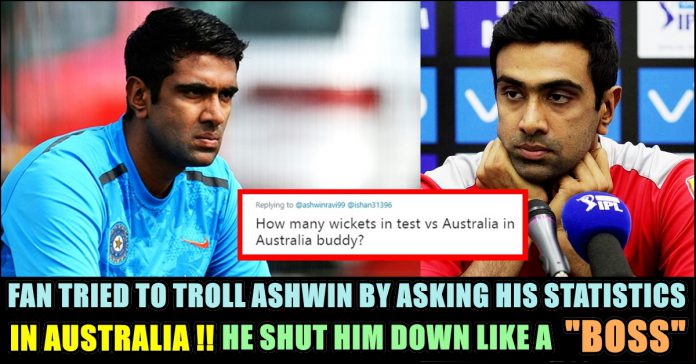 For those following Ravichandran Ashwin, it a well-known fact, he is not one to back down and let go any online trolling. And as India went down fighting Australia in the first T20I at Brisbane, the Indian spinner got in a banter with few fans who tried to troll him and gave them a befitting reply.

A difficult pitch for the bowlers, the only thing worked in their favour was the size of the ground. So, in a witty tweet, Ashwin said it was “a delight for the bowlers”. In sharp contrast to the smaller boundaries in the subcontinent, Australian grounds are renowned for being expansive. Particularly, the Gabba is one of the largest venues during this tournament. The curtain raiser of the India – Australia series proved to be an enthralling contest despite the fact that rain reduced 3 overs from each side’s quota. After Shikhar Dhawan showed his brilliance at the top once again, Rishabh Pant and Dinesh Karthik looked to be taking the visitors home before eventually falling short by 4 runs.

Ashwin, who was thrilled with the contest between the two teams in the opening T20I, shared a few tweets on the match, one which didn’t go down well with the fans. “The boundary sizes in Australia Phew – is a delight for the bowlers,” was Ashwin’s tweet that initiated an altercation as a few fans started to rais questions over the Tamil Nadu-born spin bowler’s stats in Australia. However, ignorant fans tried to take a jibe at the ace bowler and one retorted, “tum waha 6 khaate the (You used to be smashed for sixes there).”

Instead of ignoring them, as many would do, Ashwin decided to school them with facts and statistics! He reminded the troll of his statistics when he was part of the T20I squad in 2016 playing in Australia. He replied to it saying, “2 for 26, 1 for 27 and 1 for 37 in the 3-0 win last series. Thanks buddy.”

Another troll mockingly asked him about the number of wickets in the Australian test. To this, Ashwin gave a fitting reply and won our hearts. He said, “I am the one whose got the records, please go and take a look. I can’t Google you and find you.”

I am the one whose got the records, please go and take a look. I can’t Google you and find you.🙌

Twitterati took note of his smart replies and many lauded the star players for shutting the trolls. Ashwin previously had responded with fixing jibe earlier this year when Herschelle Gibbs tried to troll him over a brand endorsement and his running skills, while he gave a fitting answer to a Twitter troll who asked him to ‘learn from Moeen Ali’. “Such a closely fought game, too bad it didn’t go our way. This is going to be a cracking series,” tweeted Ashwin as Australia claimed a morale-boosting win over Virat Kohli and Co in Brisbane.

The second match between the sides will be played on November 23 (Friday) at the Melbourne Cricket Ground.