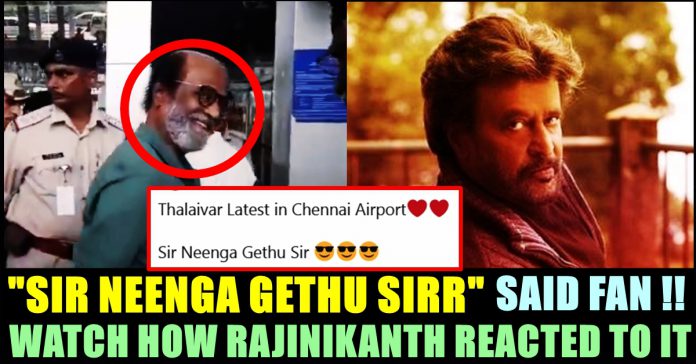 Rajinikanth met press reporters and answered to their questions in an airport. In the press meet, the actor who is fondly called as Superstar by his fans, commented on the Citizenship Amendment Act and other implements of the Central government. He said that CAA is no threat to the Muslims of our country.

“The CAA is no threat to Muslims. If they face trouble, I will be the first person to raise voice for them,” Rajinikanth said. “How will Muslims who chose to stay back in India following Partition be sent out of the country?” he added.

Rajinikanth, whose political debut has been anticipated for some time and is expected before the Tamil Nadu election next year, urged students to hold protests only after analysing the subjects and discussing with their professors. “The government has assured that Indian people will have no issues in respect of CAA. Some political parties are instigating people against CAA for their selfish interests,” Rajinikanth said.

Watch the video of his press meet here :

Superstar Rajinikanth found himself in big trouble after his speech in the 50th year celebration of “Thuglak” magazine. After his remark on E.Ve.Ra Periyar during his speech in the event, protest against the actor emerged from dmk party. A police complaint has been filed against Rajinikanth by a political group as well.

Rajinikanth who is about to make his political entry, rejected the demand of DMK party who wants the actor to make an “apology”. “They are asking me to ask apology and to express my regret. I won’t ask apology for my speech and I register it here with politeness.” said Rajinikanth.

On the profession front, Rajinikanth who was last seen in A.R Murugadoss’s Darbar is expected to be seen in Siruthai Siva’s commercial entertainer. He is also expected to work in two more films as protagonist. Meanwhile after giving the press meet, while Rajinikanth was seen returning to his way back. A video of Rajinikanth trying to interact with the actor has been surfaced.

The fan who is holding the phone, says “Sir Neenga Gethu Sir” to the Superstar to which he responds with a smile, video of which is going viral in social media platforms. Check out the video below :

This video is going extremely viral among the fans of Rajinikanth who are expressing their happiness through tweets. Check out some of them below :

Today after the interview , thalaivar on next work 🛫 #Thalaivar168

Comment your views on this reaction from the actor !!

Ahead of the Tamil nadu assembly election which is scheduled on 6th of April, Political parties of the state are looking for all the...