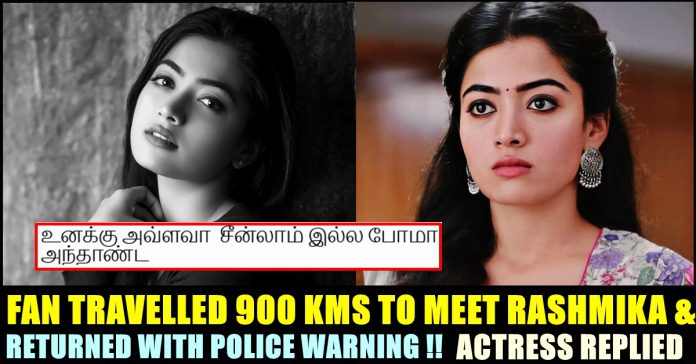 South Indian Actress Rashmika Mandanna who recently appeared in a Tamil movie named Sultan of Karthi, replied to an ardent fan of her who travelled 900 kilometres to meet her in person. The news of the fan reaching her house in Karnataka and returning without seeing her made headlines earlier. Now, the actress came up with a tweet advising him and other fans to show their love towards her in social media platforms, instead of risking their lives. She requested such fans not to do that and expressed her disappointment over not meeting the particular fan who travelled a long way to meet her.

A song from her Telugu film “Geetha Govindham” which starts like “Inkem Inkem” gained her the fame among the audience of South Indian film industries as it became a huge hit. She is also known for being interactive with her followers in social media platforms. Despite being part of very few films, the number of fan pages in social media the emerged for the actress is sky level so far.

The Geetha Govindam actress is one of the first candidate who believed to be paired with actor Vijay in “Bigil” but Nayanthara grabbed the role. However, she debuted in Tamil film industry through “Sultan” and is expected to pair with the top tier actors in coming days. Now, one of her ardent fans named Akash Tripathi travelled all the way from Telangana to Kodagu, Karnataka to meet the actress at her home.

He reportedly travelled 900 kilometres through train and auto, After reaching the area where Rashmika is living, Akash asked directions to her home to the people of the locality. They who grew suspicious informed the Police. He was advised by the cops who arrived at the spot and they asked him to head back home, It is also notable that Rashmika was staying in her new house in Mumbai when he visited her house in Karnataka.

Rashmika became aware of the unthinkable gesture of the fan and wrote a tweet expressing her emotions. She requested her fans not to get involved in doing such things She expressed her regret for not meeting Akash and hoped to meet him soon. The actress also said that she will be happy if she was shown love in social media platforms.

“Guys it just came to my notice that one of you had travelled super far and have gone home to see me.. Please don’t do something like that.. i feel bad that I didn’t get to meet you. I really really hope to meet you one day. but for now show me love here.. I’ll be happy!” read the tweet of the 25 year old actress.

Guys it just came to my notice that one of you had travelled super far and have gone home to see me..
Please don’t do something like that.. i feel bad that I didn’t get to meet you🥺 I really really hope to meet you one day❤️ but for now show me love here.. I’ll be happy! 🌸🥰

This tweet of Rashmika garnered mixed reactions with fans lauding her kind gesture and the fan’s insane behaviour of traveling 900 kms to meet her, Check out some of the reactions below :

Why would a sane guy do that. Why people are so jobless. Duh https://t.co/Gnvjk3wvju

I know, I’m asking too much but, can you have something like an annual fans meet & greet session post the pandemic ends ? 😷 recommending something for you to consider in near future! Of course, with all precautionary measures & safety! Kinda fan festival, invite only audience! https://t.co/OGbopcotr2

So sweet !!! because 3yrs back you dint even bothered to wave or even see the hundreds of fans who were waiting frm hrs just for ur glimpse..🙂..
Came a long way ig?? https://t.co/flaOU8eZev

Previous articleGroom Stopped Marriage Due To The Absence Of Mutton Curry !!
Next articleFan Wanted Vignesh Shivan To Send A Picture Of Himself Kissing Nayanthara !! Check His Reply