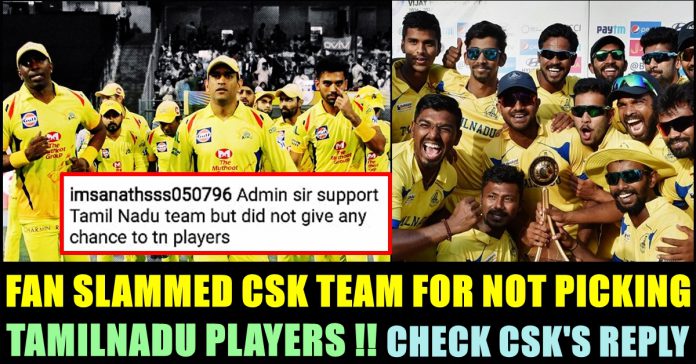 The social media account of Chennai Super Kings is very famous for their witty replies to the opponent teams and its fans. The account is currently updating about Tamilnadu’s performance in Vijay Hazare trophy. Yesterday, the Instagram account of CSK posted about team Tamilnadu led by Dinesh Karthick winning Rajasthan team.

“Abhinav Mukund, Aparajith, Shahrukh Khan and skipper DK sizzle in #yellove! 😻 Tamil Nadu win their opening encounter against Rajasthan in the #VijayHazareTrophy! #WhistlePodu 🦁💛” the caption of their Instagram post which has Dinesh Kathick’s picture said.

To this post, one of a fan who follows the account took a sly dig at the team management for not picking up any players from Tamilnadu in the IPL playing team. “Admin sir support Tamil Nadu team but did not give any chance to tn player”

To this comment, the official Instagram handle of Chennai Super Kings took time to reply to the online user by saying that they could not select the playing team for the tournament but they could make the coach Stephen Fleming who follows the account to be aware of the talented Tamilnadu players.

On Dhoni being the captain of CSK next year, A top Chennai Super Kings official recently told Mumbai Mirror that Dhoni will be part of the Indian Premier League next year. “Whatever may be the speculation, he will play for us next year,” said the CSK official. Dhoni has been CSK captain since the inception of the IPL in 2008.

What do you think on this reply from CSK ?? Comment your views below !!

Previous articleBREAKING : KAVIN Got Out Of BIGG BOSS ?? CHECK OUT THESE SHOCKING REACTIONS !!
Next articleDirector Parthiban Wants To Hurt Himself With Slippers !! SHOCKING REASON !!

Hashtag "Vintage RCB" is trending in the micro blogging social media site after the team lost the match in the 8th over of the...