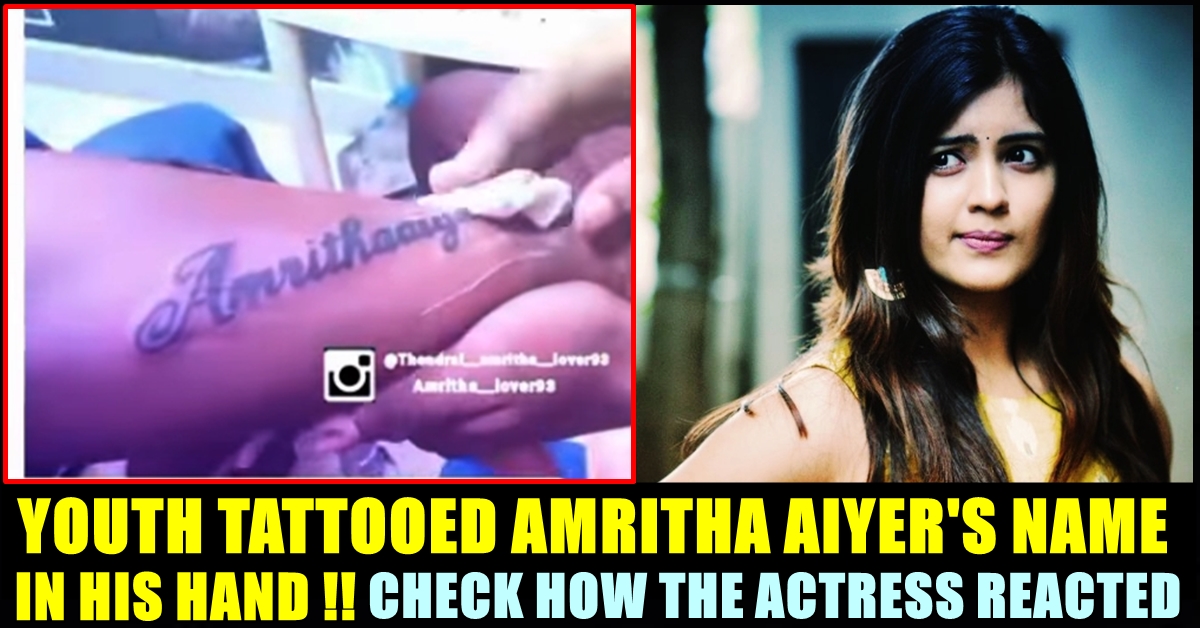 Actress Amritha Aiyer reacted to a video of one her fans who tattooed her full name in his forehand. She who got emotional, thanked the fan saying that will not be enough to express her gratitude. The actress also expressed her wish of meeting the fan in person soon by adding that she will cherish the fan’s love towards her. The post she added gained huge reception among her one and half million plus followers. The actress also turned the comment section off for the post.

Amritha Iyer became the heartthrob of Tamilnadu youths in no time with her presence in social media. Her portrayal in Vijay’s “Bigil” as captain “Thendral” gained her vast number of fans and followers in social media. To make her followers engaged, the actress became active in social media platforms by uploading her photos and updates.

Before Bigil, Amritha made her film debut with Padaiveeran in which she played named Malar. In the film she paired with singer Vijay Yesudas who is a son of popular singer Yesudas. He debuted as an actor through Dhanush’s Maari. She was later seen playing one of the female leads opposite Vijay Antony in “Kaali”. However, only after essaying the role of “Thendral”, Amritha became the darling of social media. The actress who is very much active in Instagram, enjoys more than 16 lakh followers in the photo posting social media app.

Apart from Vijay, Nayanthara, Yogi Babu, The film “Bigil” had 15 girls as a football team squad. Indhuja Ravichander, Varsha Bollamma, Amritha Iyer are few of the players who were given importance in the movie. Amritha played a role called as Thendral who is the captain of the state team. Check out some of her recent posts below :

Reacting to the fan who tattooed her name, Amritha wrote “🙈🙈🙈 edhuku 😥😥 this is so emotional 😭 Thank you word is not enough to express my gratitude . Your love towards me is something I’ll cherish ❤️ Thank you so much ❤️ have to see you soon” in her post.

On the work front, Amritha Aiyer who was last seen in “Lift”, is all set to appear in a film named “Gramayana”. Comment your views on this video and the actress’s reaction !!