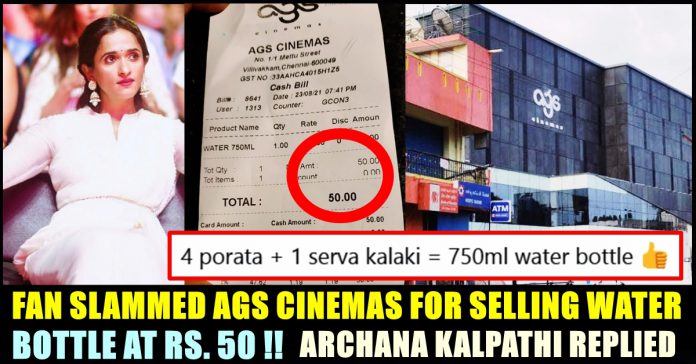 “Bigil” producer and Chief Executive Officer of AGS Cinemas, Archana Kalpathi replied to a tweet of a fan who visited her theatre that is located in Villivakkam, Chennai. The fan expressed his disappointment over the theatre charging Rs.50 for per water bottle instead of providing free water dispenser inside the theatre premises. He tagged Archana Kalpathi herself and questioned the same by uploading the picture of the bill which was given to him. For his tweet, he received response from the theatre’s owner who rose to fame among fans after producing Vijay’s recent blockbuster “Bigil”.

After four long months, theatres in Tamil nadu got reopened from Monday which is 23nd of August month with 50% of occupancy. However, most of the theatre owners are not ready to operate their theatres due to the long process of cleaning and sanitization. AGS Cinemas, a popular multiplex chain ais functioning since Monday with the screening of Bell Bottom which has Akshay Kumar in the lead.

Many notable Tamil films are expected to hit the screens during the end of August or the first week of September. Meanwhile, a fan who visited the AGS theatre that is located at Villivakkam, got dejected over the theatre management demanding Rs. 50 for a water bottle. He took to twitter and expressed his displeasure by uploading tweet tagging the theatre owner and film producer Archana Kalpathi.

He said that the gesture of the theatre management is atrocious and pointed out how fans are forced to buy water by paying Rs. 50 if they need. Check out his tweet and the bill he attached below :

The tweet grabbed the attention of Archana Kalpathi who came up with a clarification for the fan’s query. She said that the theatre management allows fans to bring drinking water from home and cited the COVID 19 situation for not keeping water dispensers at the theatre premises. “Sorry about your experience. We allow drinking water to be brought from home. We are unable to keep water dispensers at this point considering safety of patrons.” her reply to the fan read.

Sorry about your experience. We allow drinking water to be brought from home. We are unable to keep water dispensers at this point considering safety of patrons.

Archana, first kudos on taking accountability of the issu n responding !! I too dont expect water vending as it'll be a common touch point, further other food and beverages sold by is being given by vaccinated and with hand glove and hair mask on by the FnB employees

I say better keep watching contents from home instead of paying hefty for essentials.