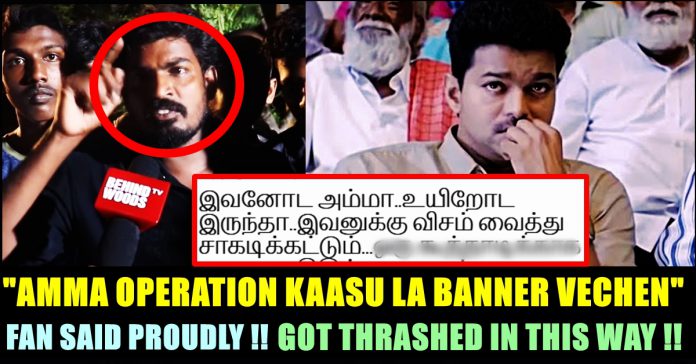 Bigil audio launch took place at Sri Sairam engineering college and it became a trending topic in social media since morning of the day of the event. Fans from all over state wished to take part in the audio launch to witness the speech of actor Vijay.

The actor who has been giving motivational speech to his followers in audio launches from Theri movie’s audio launch, raised the expectation of his fans for Bigil audio launch. In the film the actor is going to be appeared in dual role and the movie has been directed by Atlee.

In this audio launch, Vijay addressed many social issues including Subashree’s death which was caused by AIADMK’s political hoarding. He even made a statement which took dig at the current ruling party. He asked his fans to use their social media trending power in issues like Subashree’s death. “Online fan wars are fine as long as they don’t cross a line and continue to be fun. If they turn vicious and hurt people, it must be avoided. Social media has plenty of power which much be used for good. Start hashtags on pressing issues such as at the time of Subashree’s death can help bring greater awareness about an important issue,” he said.

Meanwhile, fans of the actor who took part in the audio launch seemed to be disappointed due to the fact of getting beaten by policemen. To control the crowd, police conducted “Lathi-charge” on the fans. When one of a fan raised question against the policemen, Police reportedly asked them to question the production house for providing 20,000 tickets to a hall which has capacity of having only 4,000 people.

In the video we can see the fans saying that they will do anything to prove their love towards actor Vijay. One of them says that he spent One lakh fifty thousand of his mother’s operation to keep cut out for Vijay. The other one swears to die on the spot to prove his love towards Vijay.

This video doesn’t go well with the users of online where they saw it as a regressive way to express love on someone. Check out some of their reactions here :

Idiots of this generation! Mother is important than your fking Thalapathy! pic.twitter.com/S6ikISQmYu

What do you think on the way those fans expressed their emotions ?? Comments your view below !!

Previous articlePolice Officers Burnt 13 Crore Worth “Ganja” For This Reason !! CHECK OUT !!
Next articleEXCLUSIVE : Evicted Contestant Of This Week LEAKED !! MUST CHECK !!

A hashtag saying "TN Stand With Suriya" is trending in nationwide as the actor's statement has created a serious debate in social media regarding...