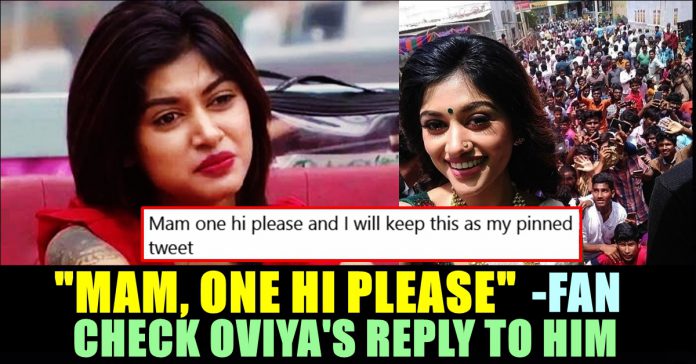 Fans trying to interact with their favourite celebrities is common in social media platforms. In order to get a single reply from them, we have seen fans involving in acts such as drawing their portraits, editing a video compilation to impress them. A similar fan requested actress and former Bigg Boss contestant Oviya to reply with one “hi” to which he received an unexpected reply from her.

My fav book is life and author myself 😜

Followed by this, another follower who seems to be an ardent fan of the actress, requested her say one “hi”. He even said that he would keep that reply as his pinned tweet which frustrated the actress. To make him understand that he needs to grow up, Oviya, without considering the hatred she is going to receive simply replied by writing “Grow up !”

Check out his tweet and Oviya’s reply to it below :

This reply from Oviya, is receiving positive reactions from her followers including from the one who received harsh reply from her. He said that he deserves such treatment to which Oviya replied with happy and kissing emojis.

Oviyaa, initially rose to fame through the film Kalavani in which she paired opposite to Vimal as school student. She grabbed the attention of Tamil cinema audience through her innocent looks and cute expressions. But she became the household of Tamil TV audience through her stint in the first season of Tamil Bigg Boss show. The concept of fans creating “Army” pages in social media for their favourite celebrities was started only since the Oviyaa’s Bigg Boss participation.

The actress attracted the audience through her bold statements and gutsy decisions inside the house. The actress confronted with almost all of her housemates inside the Bigg Boss house, including experienced dance choreographer Gayathri Raghuram and Ganja Karuppu. However the actress couldn’t make use of the fame she gained through Bigg Boss show as her movies after that show didn’t go well. But the fan base of the actress stayed the same and she continued to speak her heart out in public, including in social media platforms.

What do you think on this reply from Oviya ?? Comment your views below !!

For stating "Meera Mitun" is a brand in one of his videos, Madan Gowri, a popular Tamil youtuber forced to give clarification as the...