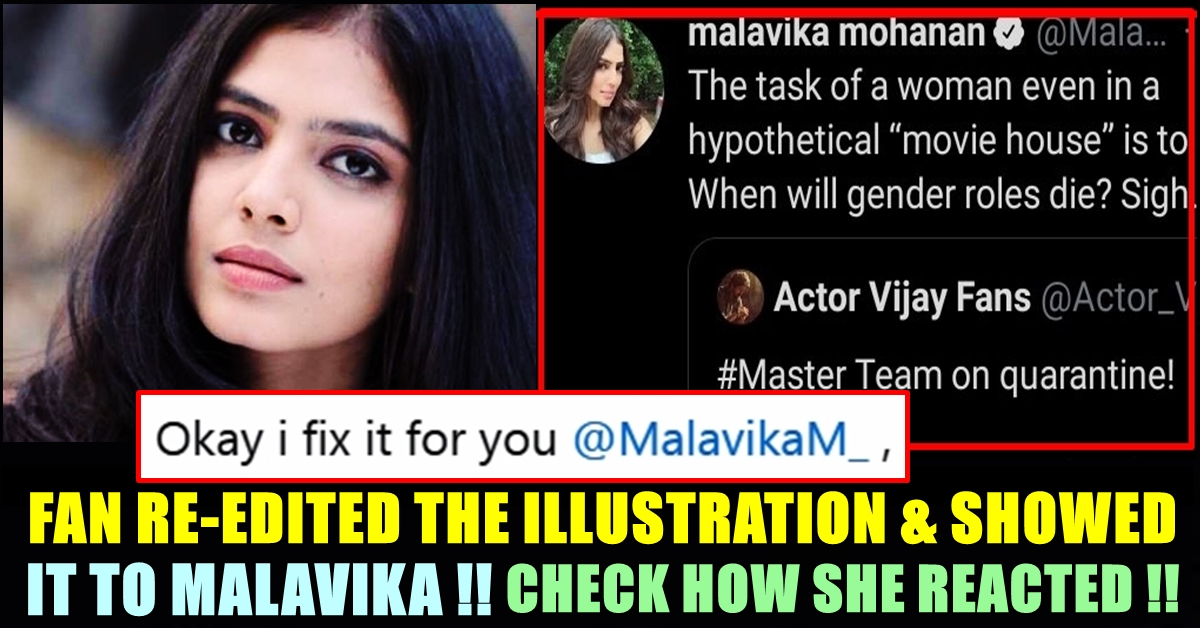 After seeing Malavika’s disagreement with an illustration where she was portrayed as a cook among other stars of “Master” movie who are chilling by hearing music and playing games, one of a twitter user re-edited it to make the 26 years old actress happy. She acknowledged the poster and kept a full stop to the controversy.

It all started when a fan thought of drawing how the crew members of “Master” film would spend the quarantine period. The illustration showed actor Vijay relaxing himself by hearing music as in few official posters of “Master” and his co-actors Arjun Das and Vijay Sethupathi were seen playing ludo game. Director Lokesh Kanagaraj was playing a game in his phone and one of a producer Jagadish was seen sitting with his laptop. Publicity Designer Gopi Prasanna and Music director Anirudh Ravichander was seen doing their respective works. Actress Malavika Mohanan was preparing food for them in kitchen.

Here’s the poster he created :

On seeing this illustration, in her first tweet, Malavika directly said that the design is “So sexist”. She asked why the only female in the house is doing domestic work while everyone else seems to be chilling/working.

In another tweet, Malavika wrote “The task of a woman even in a hypothetical “movie house” is to cook ? When will gender roles die ? Sigh”. Here’s the screenshot of it :

However both the tweets got deleted by the actress for unknown reasons. But the screenshots of the same are doing rounds in the micro blogging social media site. Many including singer and Metoo activist Chinmayi felt that Malavika Mohanan should not have deleted her tweet. Chinmayi believed that the actress got bullied, harassed, abused to delete her her.

Now, a fan named as Arun worked on the illustration and changed the “Cooking” Malavika as “Reading” Malavika and wrote “Okay i fix it for you
Malavika, Happy Reading !! Have fun like every-others in the room!”

Okay i fix it for you @MalavikaM_ , Happy Reading !!

The “Petta” actress who felt happy on seeing this change, replied to him by saying “Love this!” with hugging emoji. Check out her tweet which was liked by more than two thousand people so far :

Check out few of the reactions for her reply :

Loads of love love n strength to u..

I love courageous girls like u more than beautiful one

First Tamil Hero To Support Dulquer Salmaan !!
“If This Lockdown Happened 5 Years Ago, We Are Screwed” – Vijay Devarakonda !!