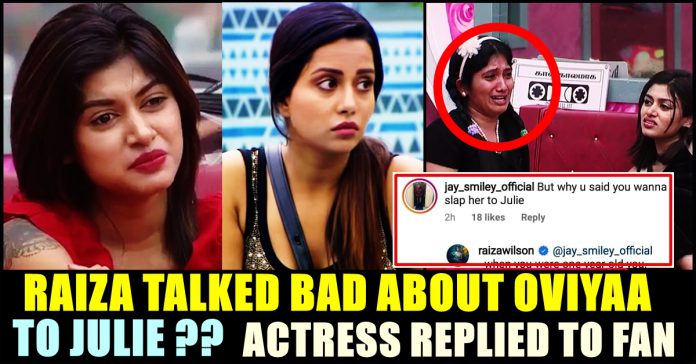 Fan Questioned Raiza About BIGG BOSS 1 After All These Days !! Check Her Reply

Number of celebrities including music director G.V Prakash, Bigg Boss fame Oviya were involved in campaigning for Raiza about her announcement on the 14th of February. Apart from the above mentioned names, VIP movie fame Hrishikesh, serial actress Nisha Krishnan also made a video which was uploaded by Raiza in her official Instagram account.

All of them said that Raiza is going to announce about her relationship status on the valentines day of this year. Check out the videos here :

Honestly the boy with the cutest smile ever 😍 Much Love @hrishikeshkk ❤️❤️❤️

Oviya, co-contestant of Raiza in the first season of Bigg Boss show also did a video for her housemate. “My darling Raiza is going to announce something special about her on Valentine’s day. What would it be ??” she asked in the video.

This girl is a true queen ❤️❤️❤️ Love love love 💝

On seeing this video, as many as 46,000 followers of Raiza liked the post. However, one of her follower who seems to be an ardent follower of Bigg Boss show asked why she said to Julie that she wants to slap Oviya. “But why u said you wanna slap her to Julie” read the comment of the user.

Raiza immediately replied to the user by saying that she is a grown up now. Her reply comment read “when you were one year old you, dint know how to walk, so now why are you walking ?? It’s called growing up !! 💝👍🏽 #positivevibesplease”

This comment from Raiza was well received by her followers as she is receiving maximum number of likes for her comment comparing to the one who questioned her. Raiza became a household name in Tamil Nadu following her successful stint in the first season of reality show Bigg Boss, hosted by Kamal Haasan. The actress won praise for her matured performance in the romantic-drama Pyaar Prema Kaadhal, in which she acted along with her Bigg Boss housemate Harish Kalyan.

She usually posts her daily routines and pictures of herself in photoshoots in her Instagram and twitter accounts in which she enjoys more than 13 lakh followers. Raiza also made a special appearance in Harish Kalyan’s latest film “Dhanusu Raasi Neyargale”.

What do you think on this reply from Raiza about her rift with Oviyaa ?? Comment your views below !!

Previous article“I Don’t Have A Degree” – Vani Bhojan Opens For The First Time !! WATCH
Next articleCinematographer Slammed Sathyam Cinemas For This Reason !!

For The First Time In India , Woman Arrested For Raping A Woman !! BIZARRE !!

A 19-year-old girl has been accused of raping a 25-year-old woman with a sex toy. The survivor had alleged that the accused had forcefully...