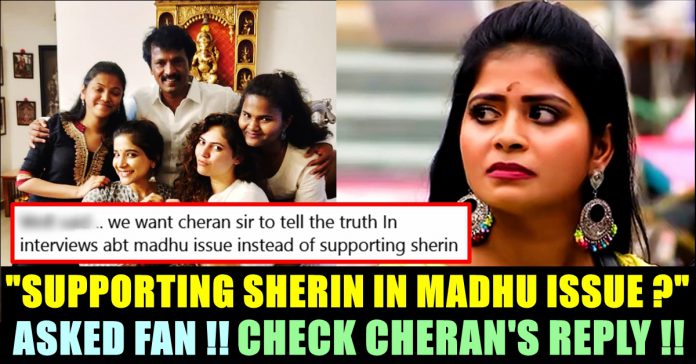 Fan Questioned Cheran For Not Meeting Madhumitha !! Here’s How He Replied !!

Bigg Boss Tamil season 3’s contestants are very much happy as the show has reached its end successfully. It ended with Malaysian singer and model Mugen rao grabbing the title. Sandy became the first runner up where as Losliya was pushed to the third place. Wishes are pouring from across the world for Mugen as he won the title of Bigg Boss season 3. He broke the stereotype and became the first contestant to win the title after winning ticket to finale task. In previous season, Snehan and Janani failed to hold the trophy after winning ticket to finale.

Cheran shared this picture in his profile with a famous Tamil saying :

On seeing this picture, few of his followers why he is not meeting Madhumitha who needs his care the most. Madhumitha, one of the most controversial contestant of Bigg Boss Tamil season 3, got terminated for harming herself. In her complaint Madhumitha has stated that her co-contestants tortured her for 56 long days and said that it led to mental depression. She also said that they forcefully sent her out of the show on the 56th day.

Another user asked him to reveal the truth in the Madhumitha issue.

In a way of answering to their allegations, Cheran said that he has been talking to Madhumitha and will meet her soon. Check out his answer here :

Cheran, one of the experienced director of Tamil film industry, participated in the Bigg Boss show as contestant and survived in it for 90+ days. He became the only contestant to be offered secret room in this entire season and he couldn’t make use of it to become one of the finalist.

What do you think on the way Cheran answered to his follower ?? Comment your views !!

Previous articleFollowed By Sreeshanth, Irfan Pathan, This CSK Player To Debut In Kollywood !!
Next articleBIGIL Not To Release On Diwali Because Of Assistant Director KP Selvah ??

Actor Suriya's own fans expressed their dejection over the star's recent twitter activities and has been asking him to listen to their requests through...