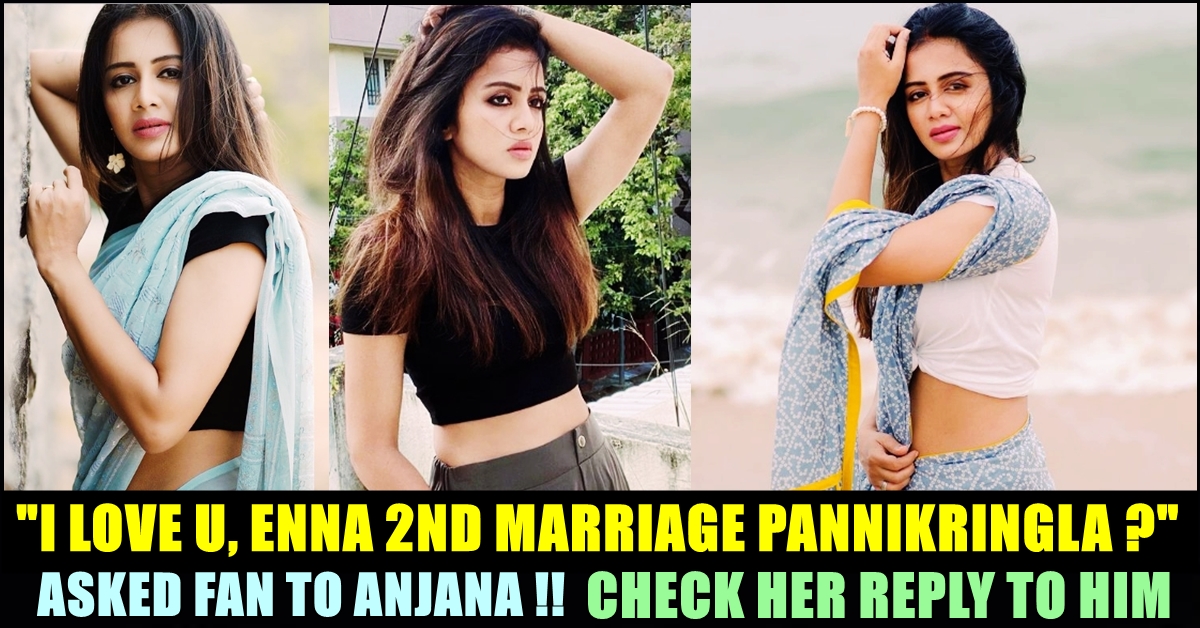 Anjana Rangan, popular video jockey who is known for hosting shows and reality programs in Television, recently conducted a question and answer session with her Instagram followers. Many questions regarding her looks, works and future ventures were asked by her followers. Among the many answers she provided to her followers, an answer she gave to a follower who proposed to marry her, has grabbed the attention of the Internet users.

Anjana Rangan is pretty much interactive with her fans and followers in social media platforms. The 31 year old host who enjoys quite a huge fan following in social media due to her unique way of presenting shows, did programs for Sun Music for nearly 10 years. She got married to actor Chandramouli of “Kayal” fame in the year 2016. The couple gave birth to an adorable son and named him as “Rudraksh”.

Anjana is engaging herself by posting pictures of herself from her photoshoots conducted in her terrace and in other places around her house. Most of the pictures in her Instagram timeline were captured by her husband and actor Moulistic.

Being a busy compere, Anjana effortlessly balancing her personal and professional which is evident through her Instagram timeline. Now, amidst this lockdown, the beautiful looking Video Jockey is impressing her followers with her elegant look and stylish poses.

Now, through the question and answer session, a follower named Balaji said that he loves Anjana and asked whether she would marry him. Replying to him, Anjana , without losing her nerves, humorously said that she said it to her husband Chandramouli. “He wants your address and says that he will send me through dunzo courier service. Do you really need all these burdens Balaji ??” she said.

To another follower who asked why she is not aging, Anjana replied saying “It is increasing indeed. How many days can I roam around like a small girl. I myself gave birth to a small kid. I became an aunty already” she said.

On dealing with haters, Anjana said “We are going to lose nothing because of their hate. If they like us, we can feel happy but we are not going to lose anything if people hate us”

Anjana, while answering to a follower who asked about denying big screen opportunities, said “when we conduct a photo shoot or wear modern clothes, people are asking whether I want to enter the film industry. Some people will ask it due to love but some will ask it in a sarcastic manner. But I don’t wish to act in films and I don’t differentiate between small and big screen. This is my space. That’s it” the anchor said.

BJP Candidate Promised To Give “Valimai Update” After Winning The Upcoming Poll !!
When Dhee Impressed These Top Female Actors Of South Cinema !!
Advertisement