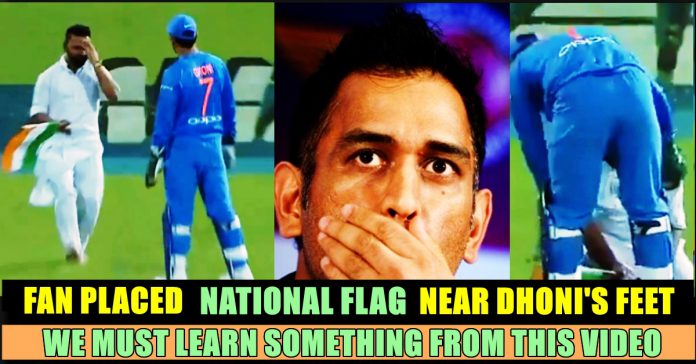 MS Dhoni has time and again showed plenty of class on and off the field and Saturday the former Indian captain showcased it yet again. During the India vs New Zealand 3rd T20I, a fan carrying the Indian flag breached security in Hamilton, ran to Dhoni and touched his feet. The 37-year-old saw the Indian flag touching the ground, and quickly took it away from the fan and gave it to a security personnel. Dhoni’s brilliant gesture went viral on Twitter, sending fans into a frenzy. The incident happened when a fan paced to the ground and ran straight to Dhoni, who was keeping the stumps. Armed with an Indian flag, the delighted fan went down on his knees, then touched Mahi’s feet and handed him the flag before being taken away by the authorities.

The highlights of the incident were aired during the second innings while India was chasing, leaving the commentators foxed.

A fan tweeted a video of the incredible moment.

Dhoni turned up for the 96th time for India, and has played for Chennai Super Kings, in the Indian Premier League, 169 times. Dhoni has also played 30 matches for Rising Pune Supergiant, in 2016 and 2017 and also represented Jharkhand, his state team in 4 T20s and once for Indians during an England tour in 2011.

Dhoni in the New Zealand innings effected a lightning fast stumping, taking just 0.099 seconds to stump Tim Seifert off the bowling of Kuldeep Yadav and also took a catch behind the stumps.

However, it was not a happy day for Dhoni with the bat as he scored only 2 off 5 deliveries as went down by 4 runs. New Zealand won the three-match series 2-1.