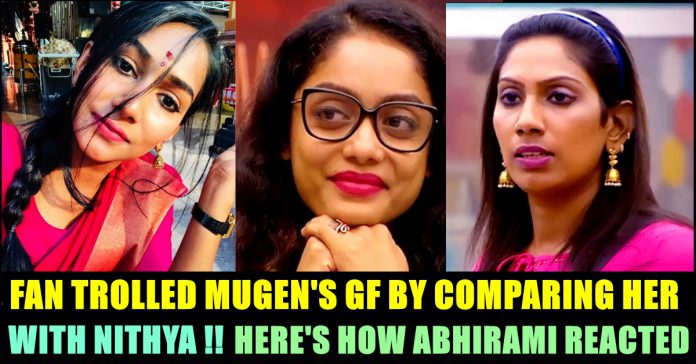 Mugen who is one of the promising contestant inside the Bigg Boss house, is likely to win the title as well. Originated from Malaysia, the singer and aspiring actor has already gained a separate fan following in Tamilnadu. Known for his short temper, Mugen lost it couple of times inside the house and both the time he did it infront of Abhirami Venkatachalam, actress of Nerkonda Parvai.

Abhirami proposed to Mugen while being inside the house but he politely denied it by saying that it is just friendship. He also said that he is interested in another girl named as “Sparkle” who is in his hometown. But Abhirami continued to love him even after her eviction and stretching her supportive hand by posting good things about him in her official Instagram.

The best ever in the house… true soul.. game on babe rock the show … it's freeze today … can't wait to see their moment … en support eppavumey unakuthan da… my superhero …. 🦋🔱

Proud of you da… let god give you all success … 🦋

Yasmin Nadiah alice Sparkle is also active in Instagram and uploading posts about Mugen. She who seems to have not nodded “Yes” to Mugen yet, sharing posts about him positively.

Now, to our shock, an Instagram story of Abhirami shows a page named as Abhigen_4ever trolling Yasmin for her looks. The meme they shared shows Yasmin being compared with Nithya, former Bigg Boss contestant. By sharing this screenshot as story, Abhirami asked her followers to report that account as she doesn’t want pages to be created to hurt others. Check out the screenshot of the story here :

Followed by this she also posted another story about the page being renamed immediately. She wrote “Next sec changed the account as private and name changed”. Check out the screenshot of the story here :

It is indeed amusing to know that people are bored to create Instagram accounts to troll a person who is not known to many people. It is also difficult to understand that their love for Abhirami made them to go this extreme. Fortunately Abhi who is busy in her upcoming projects after getting evicted from Bigg Boss, noticed the followerless account immediately and vanished it. Abhirami Got Upset & Forgot Mugen After Seeing This Statement From Mugen’s Girlfriend ??

What do you think on these type of fans who degrade others to celebrate their favourites ?? Comment your views below !!