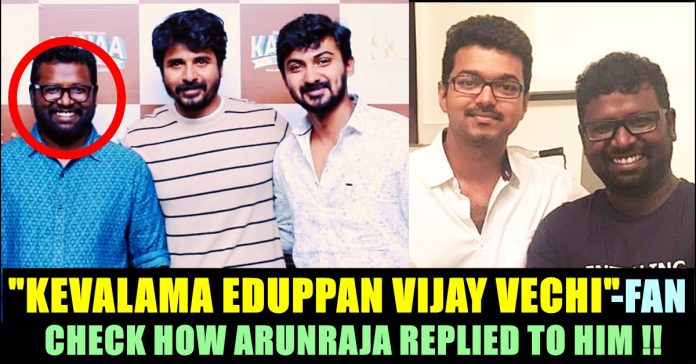 Now the fans of the actor already started predicting the director of his 65th film. Earlier it was rumoured that director Perarasu who already gave two blockbuster hits with the actor is going to reunite again with him in his 65th movie. However, the Lokesh Kanagaraj’s directorial is currently is in initial stage of production and it is too early to predict his next film’s director.

However, in a conversation between a group of fans in micro blogging platforms twitter, it seems one of a fan wished director Arunraja Kamaraj to direct actor Vijay in his next. Being an actor, singer and lyricist, Arun made his directorial venture through the film “Kana” which was produced by his dear friend Sivakarthikeyan with whom he shared screen space in the movie Maan Karate.

After finishing college Arun Raja worked as an assistant director in Nelson Dilipkumar’s Kolamavu Kokila. Later, he went on to name a character in his movie Kanaa after Nelson Dilipkumar which was played by Sivakarthikeyan.

Coming to the fan’s wish of having Arunraja as the director in Thalapathy 65, a fellow twitter user made a disrespectful comment about the filmmaker. He even said that Arunraja couldn’t handle a big star like Vijay. “Aana ivanlam kevalama dan eduppan vijay lam handle panna mudiyathu” read the tweet of the user.

The user even asked the director not to narrate story to Vijay as the film which comes finally will be boring.

This tweet from the user grabbed the attention of the filmmaker himself. Arunraja Kamaraj immediately replied to him by posting a GIF of Heath Ledger’s Joker character clapping hands slowly.

As soon as this tweet surfaced, many started to support the filmmaker and fed him positivity. Arun Raja, with his reply denoted that he is watching all the trolls and hatred against him. The director later shared a tweet of a user who posted a dialogue from “Kanaa” which is relevant to his situation.

Check out some of the other reactions he is receiving :

What do you think on Arunraja Kamaraj directing actor Vijay ?? Comment your views !!

Previous articleThis Popular Anchor Gets An Important Role In Thalapathy 64 !! UNEXPECTED !!
Next articleElderly Man Made Cheap Comments About Kasthuri !! Check How She Gave Him Back !!

In order to arrest the man who was accused of brutally raping, torturing a three-year-old girl in Gurugram Sector 66 on November 11, the...