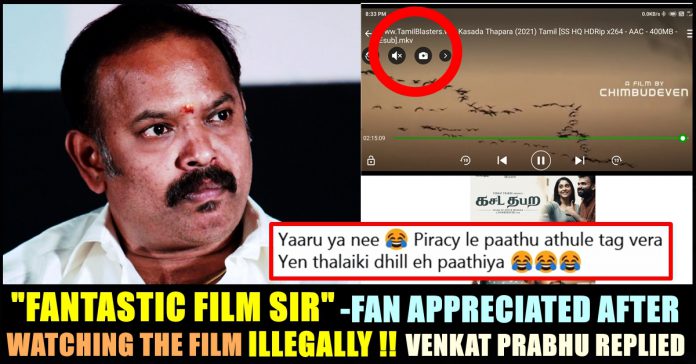 After watching the recently released “Kasadathabara” through an illegal piracy website, a twitter using Tamil cinema fan, came up with a tweet lauding the makers of it. He tagged the official twitter accounts of Harish Kalyan, Venkat Prabhu and Premgi Amaran by uploading the screen shot from the movie. On getting notified by the tweet, Venkat Prabhu who found that the fan watched the film through an illegal website, requested him not to support piracy. The tweet goes viral among the users of the micro blogging social media site.

The film got directly released on Sony Liv online streaming platform due to the theatres shut down amidst the COVID 19 lockdown restrictions. It garnered various kind of receptions from the fans who watched it on Sony Liv. Meanwhile, a twitter user named “Ilayathalapathy Kishore” who identifies himself as an ardent Vijay fan through his display picture and bio, uploaded a tweet saying that the film is fantastic. He also mentioned about Chimbu Devan directing Vijay in “Puli” film, a fantasy action film.

Tagging Harish Kalyan, Venkat Prabhu and Premgi, the fan added a screen shot of the film ending. The screen shot proved that the user had downloaded the film through an illegal piracy platform named “Tamil Blasters” for 400 MB. “Just an ( chimbudevan – puli) film fantastic 5/5 congrats all team” his tweet read.

Reacting to the tweet, Venkat Prabhu who is known for directing Ajith, Suriya, Karthi in Mankatha, Mass, Biriyani respectively, said that he feels glad about the fan liking his movie. He went on to request the fan not to support piracy as well. “Glad u liked our movie! But Please don’t support piracy brother” VP’s reply tweet read.

Check out some of the reactions VP’s tweet received :

Sorry sir.. But..online platform not good.. This kind of film's must be released theatrical 😌💖💖💖

16 Y/O Tamilnadu Boy Killed Himself For Bike !! Guilt Killed His Mother During Funeral !!

A mother who felt guilty that her son committed suicide because she didn’t get him a motorbike immolated herself during his funeral on Tuesday...