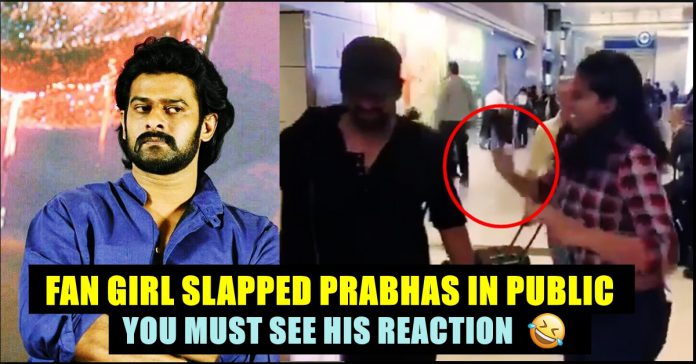 In 2017 when Baahubali 2: The Conclusion released, it not only became the biggest blockbuster to come out of Indian cinema, it also catapulted Prabhas to stardom. He became the only actor in the country to be the pan-India sensation. Thanks to the blockbuster success of Baahubali 2: The Conclusion, there is a huge craze for Prabhas among fans. So much so that his next release Saaho is one of the most awaited movies of 2019. 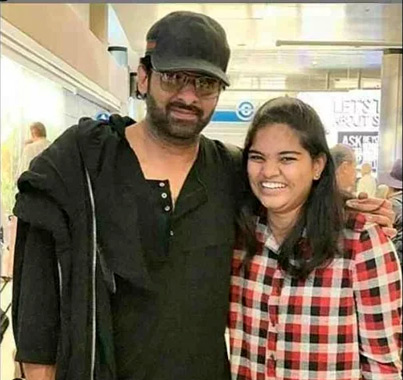 A crazy fan of Prabhas was visibly excited and was seen jumping in joy, quite literally. After taking a photo with him, she casually slapped him in his cheek. Prabhas was taken aback for a moment, stumped to see this kind of a reaction. But he soon recovers from the shock and seen touching his cheek with a smile on his face in order to pose for another selfie with another fan. The girl is later heard softly saying “Sorry!” off camera.

Prabhas, when he appeared on Koffee With Karan, revealed that he’s an introvert and is extremely shy around fans. When Karan Johar asked him about the women attention, Prabhas said, “Let them stay far away and love me.”

On the work front, Prabhas will next be seen in the sci-fi action Saaho which also stars Shraddha Kapoor, Neil Nitin Mukesh and Jackie Shroff. The long awaited film is directed by Sujeeth and will release on 15 August. And he will also team up with Pooja Hegde for a bilingual film which will be directed by Radha Krishna Kumar. This film will be a love story and is said to be going on floors later this year.

Previous articleREVEALED : Why “NERKONDA PAARVAI” First Look Released This Much Earlier ?? Check Out !!
Next articleTamannah, Kajal & Other Stars Danced All Night At Isha Yoga !! Check Out The Reactions !!

Actress Got Thrashed In Public For Stealing Another Woman’s Husband ??

Actress Prakruthi Misha who is known for winning national award, got assaulted by the wife of her co-star Babushan Mohanty is going viral in...

TV actor Gemini Mani who is known for appearing in serials of Vijay Television such as "Office", "Eeramana Rojave", appeared in an interaction with...