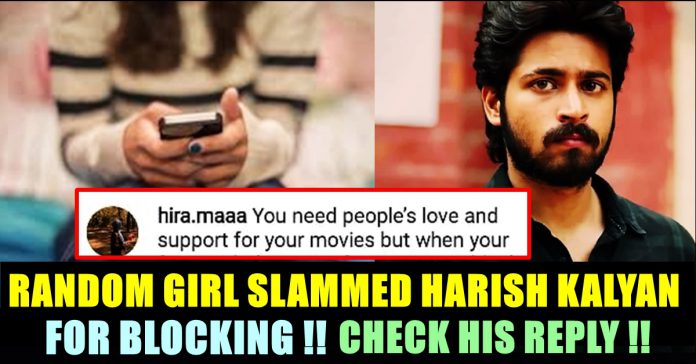 Harish Kalyan, who rose to fame after his stint at Bigg Boss Tamil season 1, turned out to be a successful hero with the film Pyaar Prema Kadhal. He acted as an innocent loverboy in the film alongside his Bigg Boss co-contestant Raiza Wilson.

After that, the actor appeared in “Ispade Rajavum Idhaya Raaniyum” in which he played the role of a angry youngster who falls in love. Now Harish is all set to start work in his next venture which is titled as “Dhanusu Raasi Neyargale”.

The film is produced by Gokulam Gopalan and features Harish Kalyan, Digangana Suryavanshi and Reba Monica John in the lead roles. Ghibran composes the music and background score for this movie. On 31st of October, Harish Kalyan, through his official twitter account released the first look of his upcoming film.

While sharing the post, Harish wrote “Here is d first look of my next film #DhanusuRaasiNeyargalae Thank u @sivakarthikeyan brother for releasing it. Need all ur love & support!”

For his charm look and kind attitude, Harish Kalyan has a separate fan base in social media and most of them are girls. To this post of the actor, one of a female fan of him, in his comment section, slammed him for ignoring his fans and blocking them in social media platforms.

She even accused that the actor needs the love and support of the fans only for his movies. “You need people’s love and support for your movies but when your fan needed support from you, you blocked them. Love and support is a two way thing, learn to give back.” comment of the Instagram user read.

Through one of the replies, we can understand that the fan girl is accusing Harish for blocking her friend who needed some kind words from the actor.

Followed by that she even added that she is also a fan of Harish Kalyan and asked apologize for the harshness in her first comment.

What do you think on the reply of Harish Kalyan to one of his follower ?/ Comment your views below !!

Sunny Leone's journey from an awkward, unibrowed teen in Canada to adult industry darling in Los Angeles to Bollywood actress in Mumbai has all...

Video of an interaction of Andimuthu Raja, popularly known as A Raja, one of an important leader of the DMK party doing rounds in...