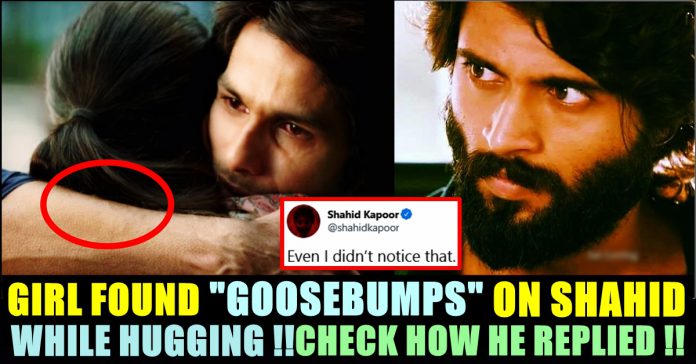 Arjun Reddy which had Vijay Devarakonda in the lead, is a blockbuster in South cinema. The film received remake rights in both Hindi and Tamil language. In Tamil, Vikram’s son Dhruv is going the play the role of male lead and in Hindi, Shahid Kapoor replaced Vijay Devarakonda.

Shahid Kapoor’s Kabir Singh became a huge hit world wide with a box office collections of more than 250 crores. Kabir Singh focuses on the title character, an alcoholic surgeon with an explosive temper who goes on a self-destructive path after his girlfriend is forced to marry someone else. In the climax, Kabir Singh reunites with the love of his life once he knows about her pregnancy.

A fan who watched the scene recently, noted something special about the protagonist’s performance. The twitter user wanted to expose the fact on how Shahid Kapoor kept the “Audience glued to the screen” with his performance. But the most special thing she mentioned is the “Goosebumps” in Shahid Kapoor’s arms while performing the scene.

She even posted the picture of the same to express her emotions. The tweet of her read as “When the actor brings the character to life and feels his emotions, the audience will be glued to the screen. @shahidkapoor actually had goosebumps when #KabirSingh got to know that he’s going to be a father. Respect, Shahid. 👏🏼”

When the actor brings the character to life and feels his emotions, the audience will be glued to the screen. @shahidkapoor actually had goosebumps when #KabirSingh got to know that he’s going to be a father. Respect, Shahid. 👏🏼 pic.twitter.com/Xj8R4o8BO6

This post from the user grabbed the attention of the real “Kabir Sigh” himself. He lauded the observation of the fan and said the only noticed it when the director pointed it out to him. “Even I didn’t notice that. The director Sandeep told me after he saw the edit. Amazing that you caught it.” the tweet of Shahid read.

Even I didn’t notice that. The director Sandeep told me after he saw the edit. Amazing that you caught it. https://t.co/7GXKPaO5wz

Despite being a film which is criticized for its misogyny perspective, the film has a huge fan following across the country. Check out some of the reactions for Shahid’s reply :

Ahhh! Didn’t expect a reply at all 😱🥰🥰🥰 I watch your films several times just to focus on different aspects of your acting 😂❤

Yesteryear actress Rekha who recently grabbed the attention of TV audience through the reality cookery show "Cooku With Comali" has revealed about a fact...

The winning duo Vetrimaaran and Dhanush have announced the title of their next movie titled Asuran.  Earlier the actor shared the first look of...

“I Missed To Act In VTV, SMS & Ratchasan” – Young Hero Opened For The First Time !!

Actor Jai who is known for appearing in films such as "Chennai 28" and "Subramaniyapuram", in a recent interview with Suryan FM, opened about...

Users of online platforms couldn't resist reacting to the new low against the dollar amid weakness in domestic shares. A rise in global crude...