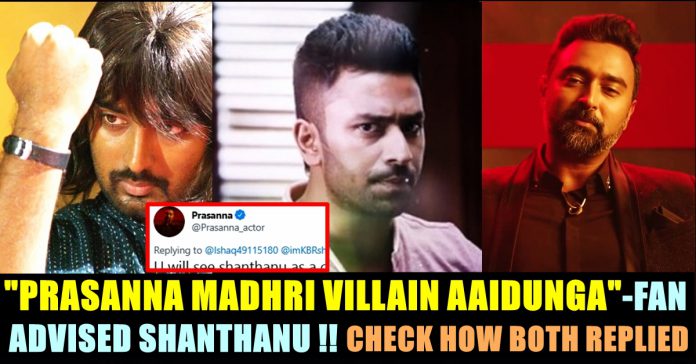 Fan Advised Shanthanu To Become A Strong Actor In Kollywood !! Check How Prasanna Replied To Him !!

Yung filmmaker Karthick Naren made his mark in Kollywood with Dhuruvangal Pathinaaru, which received much critical acclaim. While his second film Naragasooran is yet to see the light of day, his third film Mafia, starring Arun Vijay and Prasanna, is all set for release.

The teaser of Mafia was unveiled on social media on September 16. The visuals of Karthick Naren’s film promise an intriguing cat-and-mouse game between the leads. From the first look, the teaser will remind you of Madhavan and Vijay Sethupathi-starrer Vikram Vedha, which also dealt with a similar theme.

Here is the much anticipated teaser of #Mafia.. good to see young talents coming up with unique concepts, wish the team all the very best… 👍@LycaProductions@karthicknaren_M @arunvijayno1 @Prasanna_actor @priya_Bshankar #MafiaTeaser https://t.co/Rhb4oYbKen

While Arun Vijay’s character is compared to a Lion, antagonist Prasanna is compared to a cunning fox. The film is the battle between a lion’s strength and a fox’s intellect. Along with slick visuals, the teaser has Arun Vijay and Prasanna engaging in a war of words about each other’s strengths.

Meanwhile actor Shanthanu who is known for acting in films like Siddhu +2 and Koditta Idangalai Nirappuga, posted a tweet. He expressed his happiness on seeing actors like Arun Vijay and Prasanna who worked very hard in film industry to excel in it, getting featured in a same film.

One thing I love about this !! Two deserving actors who’ve struggled & worked hard for really really long … @arunvijayno1 & @Prasanna_actor Getting what they deserve & blazing in Beast mode🔥😎
Loving this teaser🔥 looks lit🔥 Best wishes to the whole team ! @karthicknaren_M https://t.co/BVVExRlUEg

On seeing this wishes, one of Shanthanu’s follower asked him when he is going to give come back in film industry. He also advised him to act in antagonist roles like Arun Vijay and Prasanna did to grab a strong place in Kollywood.

I’m just asking Sir, neenga eppo comeback kuduke poringa…..my idea is sir please act as a villain like what Arun Vijay Sir and Prasanna Sir did to get a strong place in Kollywood…. I’m WAITING

To our surprise, before Shanthanu, Prasanna intervened and made sure that Shanthanu would definitely become a “celebrated hero” very soon.

U will see shanthanu as a celebrated hero very soon

This gesture from Prasanna won many hearts and Shanthanu shared this tweet of Prasanna in a way of thanking him. Shanthanu in his reply to the fan said “My time will come brother 😊 patience is everything”

My time will come brother 😊 patience is everything

Shanthanu also replied to another fan who stated similar statement. He said “Time is the only answer 😊💛 Patience is everything !
Whether it’s gonna be #Kasadatabara , #VaanamKottatum , #RaavanaKottam or something bigger after this 😊”

Time is the only answer 😊💛 Patience is everything !
Whether it’s gonna be #Kasadatabara , #VaanamKottatum , #RaavanaKottam or something bigger after this 😊

What do you think on Shanthanu acting as “Villain” in a movie ?/ Comment your views below !!

Previous articleTop Tamil Actress Scared To Interact With Reviewer Prashanth !! Check Out The Reason !!
Next article“Kavin Supports Tharshan Only Because Of The Claps” Says His Best Friend !! SHOCKING INTERVIEW !!

Deepak Chahar blew away the Bangladesh batting order in the third T20I to hand India a 2-1 series win at the VCA Stadium here...

Tanushree Dutta had become super-famous for her role in Aashiq Banaya Aapne in Bollywood. Tamil People loved her hotness and her bold avatar in...