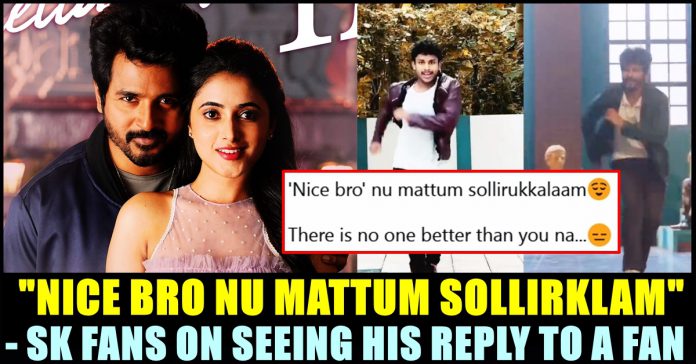 The most awaited video song of “Chellamma” from “Doctor” released recently and is going viral among the fans. The 4 minute long song is currently trending at no.1 in youtube with 8 million plus views within four days of time span. The Telugu version of the video song released simultaneously with the title “Chittemma” and is turning out as a huge hit as well.

Along with the celebrations from Sivakarthikeyan fans who are mostly kids, appreciations posts for the dance steps, visuals, lyrics and music are flooding in the social media platforms. Meanwhile, a fan from Kerala recreated the dance steps of Sivakarthikeyan and uploaded the video of it in Twitter tagged the actor/producer himself only to receive a humble reply in return.

“Doctor” film released in theatres on 9th of October amidst much expectations. The film became one of the first releases post COVID 19 lockdown. Plot of “Doctor” revolves around the protagonist who works as a doctor, decides to track down the antagonist who runs huge human trafficking mafia. He gets himself involved in the mission after finding a girl who belongs to the family of his love interest missing.

By having a bunch of comedy actors such as Yogi babu, Kingsley, Deepa and others, Nelson handled the film by giving importance to the humour. Amidst the tensed circumstance he creates, he himself orchestrates one liners and humorous punches which worked out well among the family audience. Several prolific filmmakers such as Shankar, Venkat Prabhu, Mari Selvaraj has posted tweet praising the film in their timeline.

While the film is still running with houseful shows, Sivakarthikeyan uploaded a post in his twitter timeline declaring it as a “Mega blockbuster”. Most recently, the makers released the video song of “Chellamma” in youtube to boost the hype in order to have repeat audience for the film. As said, the song is garnering humongous amount of positive response from fans.

The video garnered the attention of Sivakarthikeyan himself who immediately replied to encourage the youth. SK, in a humble manner, said that his dance moves are better than mine. “Nice bro actually better than mine” the actor wrote to make Neeraj happy.

The tweet garnered huge reception from the followers of Sivakarthikeyan. “A follower said that one need a special heart to tell such thing” whereas another fan of the actor asked him not to act so humble which will lead people to cheat him. Check out some of the reactions below :

It takes a lot of guts to say something like this.. nice to see… something to learn… @Siva_Kartikeyan #Sivakarthikeyan #Doctor #ChellammaVideoSong https://t.co/TPuFt0GyRL

There is no one better than you na…😑

seen any star so down to earth????? I mean, to THIS EXTENT!!!! maaaannnn! you are one in a billion😭 and thats undeniable

Ithala solla periya manasu venum, that's why like you more than your movies ❤

On the work front, Sivakarthikeyan is busy shooting for his upcoming flick “Don” which is being made under his own production. He is also expected to be seen in “Ayalaan”, a science fiction of “Indru Nettru naalai” fame Ravikumar. Comment your views on these old posts of the actor !!