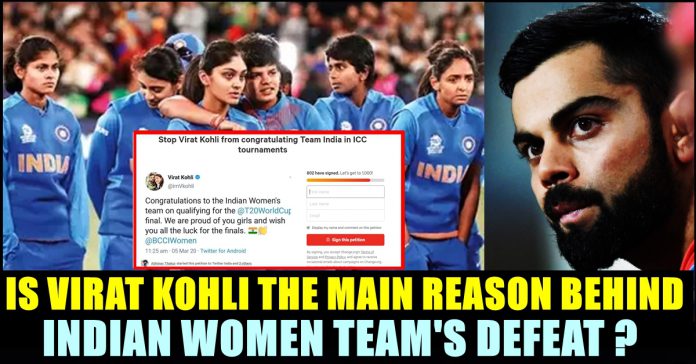 Since Dhoni stepped down from his captaincy position, Virat Kohli is captaining Team India. Despite of leading the team in a successful way, the 31 year old continues to fail in winning Team India a ICC trophy. Followed by him, India’s Under 19 men’s team reached the finals only to lose against Bangladesh. Since the 2013 Champions Trophy win under MS Dhoni, the men’s team has reached 2 more finals such as World T20 2014, Champions Trophy 2017 and 3 semi-finals of 2015 World Cup, 2016 World T20, 2019 World Cup. However they failed to win the deciders, despite of performing well throughout the tournament.

India women, on the other hand, have now reached 2 finals of 2017 World Cup, 2020 T20 World Cup and another semi-final appearance in the 2018 edition of the T20 World Cup but failed to win a trophy just like the men’s team. Now, to make team India to win in upcoming ICC tournament, fans came up with an initiative. They have decided to stop Virat Kohli from congratulating the blue team to make them win.

A fan named as Abhinay Thakur has initiated the petition on popular petition signing platform Change.org blaming Indian captain Virat Kohli for the loss of Indian team in ICC tournaments. Considering the wishes of Virat Kohli and Virender Sehwag as a curse, he made enormous number of people to sign the petition. To prevent them from Congratulating, Abhinay wants to suspend their social media accounts if they continues to do it.

The bizarre petition started on the day when Team India lost to Australia in the finals of Women’s T20 tournament. “Stop Virat Kohli and Sehwag from wishing Indian teams in ICC tournaments especially in Semis/Finals. These both jinxx our victories..! Suspend their social media accounts if they don’t stop posting congratulations post.” read the petition of the ardent Indian cricket fan. His petition received 800 supporters so far.

Ahead of the finals Kohli wrote “Congratulations to the Indian Women’s team on qualifying for the @T20WorldCup final. We are proud of you girls and wish you all the luck for the finals. Flag of IndiaClapping hands sign @BCCIWomen” through his official twitter account. This tweet received more than 1 lakh likes as soon as posted.

Check out the screenshot of the petition below :

Check out some of the reactions of the fans with similar mindset :

Tweeted for U19 boys, Indian lost the final.
Tweeted for women's team, and about to lose the final. #INDvAUS pic.twitter.com/t5X7O7cfSY

Comment your views on this petition being signed widely !!

Previous articleIndian Minister Protested Against CoronaVirus !! WATCH
Next articleHilarious Reply Of CSK For The Screenshots Which Are Doing Rounds !!

South Indian actress Shruti Haasan reacted to a report that said she got married to her long time boyfriend Santanu. The actress brushed off...