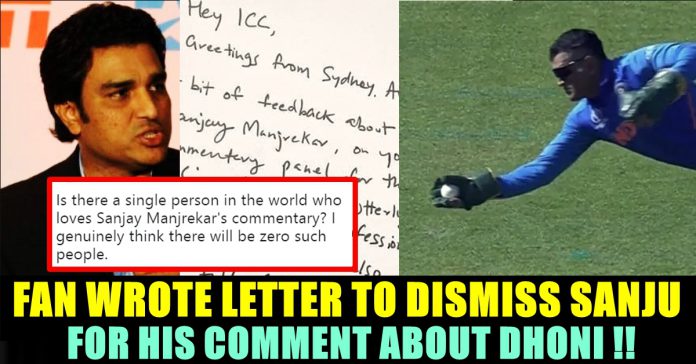 Fan Directly Sent A Letter To ICC To Remove Sanjay Manjrekar !! Check Why !!

Sanjay Vijay Manjrekar is an Indian cricket commentator and former cricketer. He played international cricket for India from 1987 until 1996 as a right-handed middle order batsman. He scored just over two thousand runs in Test cricket at an average of 37.14. He occasionally played as wicket-keeper. Following the conclusion of his cricket career, he now works as a cricket commentator. 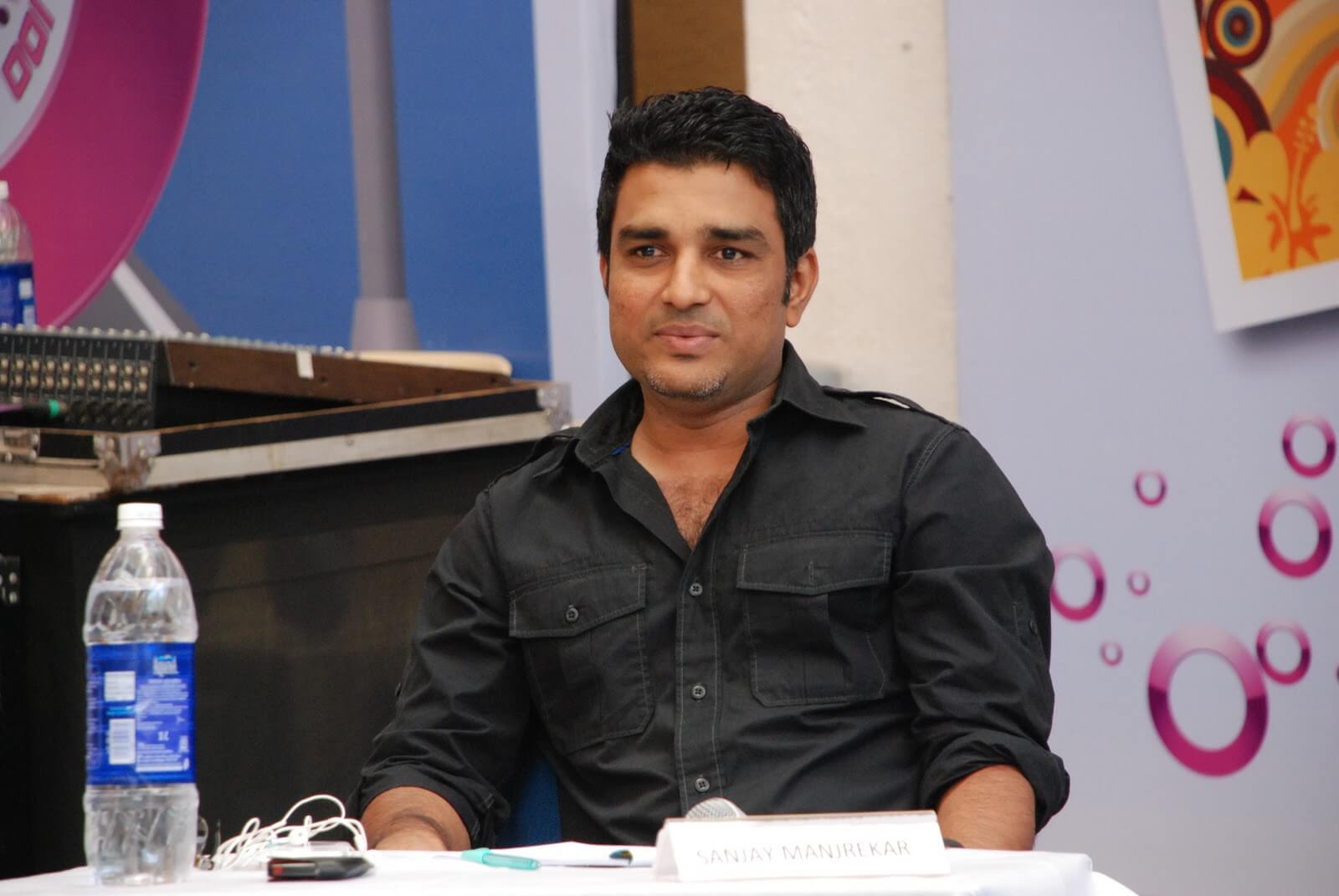 He is currently giving commentary for the ongoing world cup tournamenet which involves 10 teams from all around the world. While giving commentary in IPL tournament, Sanjay Manjrekar was widely criticized by online fans for giving biased commentary. He is known as a big time supporter of the current IPL champions Mumbai Indians. According to the fan, Manjrekar while commentating during India’s match against Afghanistan, in reference to MS Dhoni used the word ‘our’. In his letter to ICC he wrote “Hey ICC! Greetings from Sydney, Australia. A bit of feedback about Sanjay Manjrekar, on your commentary panel, for CWC: I find him utterly biased and very unprofessional, behind the mic. He also sounds full of himself. Other than that, great World Cup. Thanks,”

Check out the letter here : 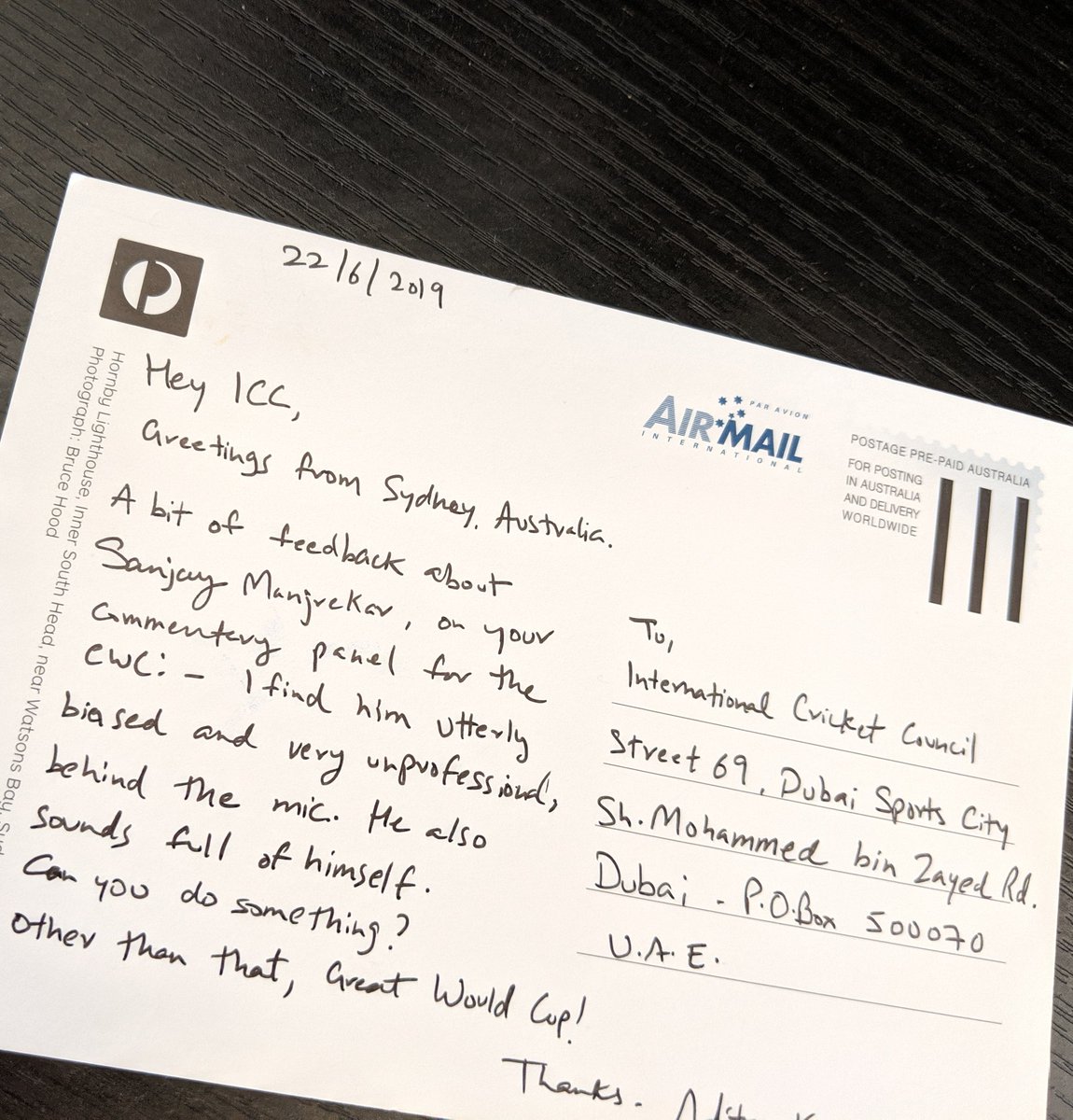 While posting this picture in Twitter the user wrote “I am unahappy with Sanjay Manjerekar’s commentary. I wrote to ICC about it. This is for the comment Manjrekar made a few days ago when he said this about Dhoni: “He is our watchdog behind the stumps”. You are a commentator. You have no side. There is no “us”. There is no “our”.

I am unahappy with Sanjay Manjerekar’s commentary. I wrote to ICC about it. #CWC19 pic.twitter.com/KzgqtLHuzU

This is for the comment Manjrekar made a few days ago when he said this about Dhoni: “He is our watchdog behind the stumps”. You are a commentator. You have no side. There is no “us”. There is no “our”. #CWC19

Among several Indian cricketers such as Lakshman Sivaramakrishnan, Ravi Shashtri, Sourav Ganguly, Sanjay Manjrekar is one of them. The former cricketer is either too harsh on a few players or too favourable to a few others. Fans find his opinions baseless at times and get extremely irked by his comments.

I’m willing to pay Hotstar extra money to give me the world up coverage with no Sanjay manjrekar commentary. #INDvsAFG

India took all the wickets before Sanjay Manjrekar could come for his commentary stint.

huh my postcard made it far (but not yet to ICC headquarters I am sure) https://t.co/qEgO6CybUX

Is there a single person in the world who loves Sanjay Manjrekar’s commentary? I genuinely think there will be zero such people.

Previous article“Kohli Is A CSK Fan” Said Stand Up Comedian Aravind SA !! Check How Ashwin Reacted !!
Next articleTwitter Exploded When Every Team Of IPL Joined To Celebrate India’s Winning Streak !!

Nearly 3 months back, to our shock a video has been surfaced on internet through a twitter ID named Raman Sharma Magic where the...

Fans Humiliated This Pace Bowler For Expressing His Wish On Playing For India Again !! Check His Reply

A Twitter user humiliated Indian pace bowler Jayadev Unadkat by asking him at what speed he will bowl after he expressed his wish about...