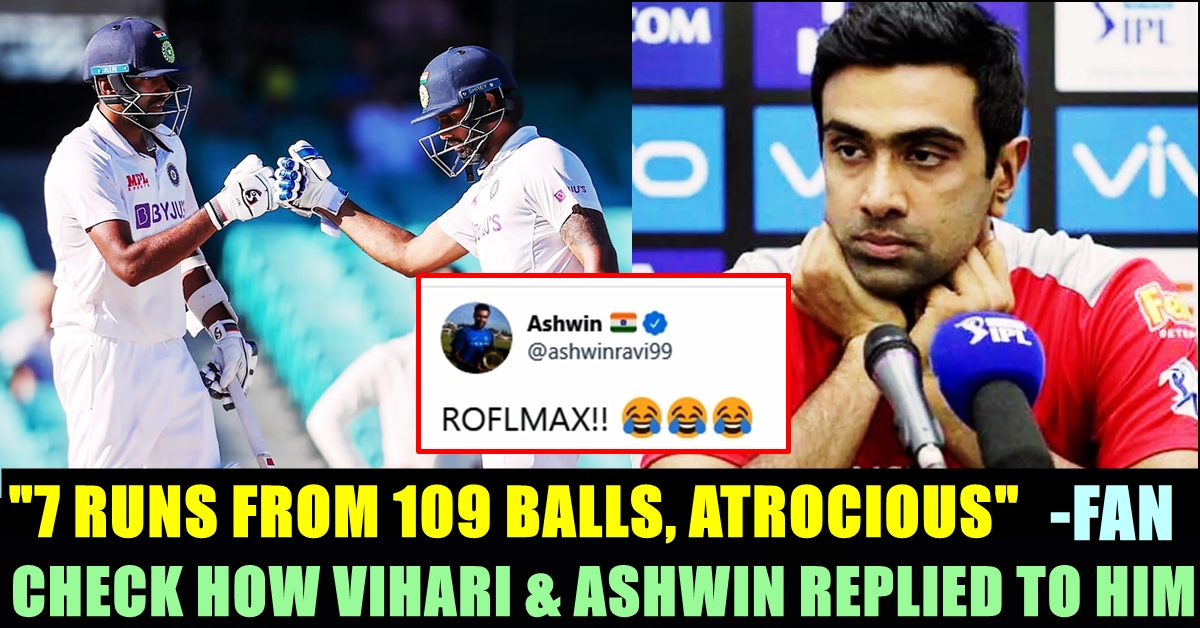 For criticizing the batting innings of Hanuma Vihari, a twitter user named Babul Supriyo got brutally trolled not only by Vihari but also by Ravichandran Ashwin and by the majority number of online cricket fans. Babul whose bio says that he is a singer by heart and Ex Banker, said that Vihari ruined India’s chance of winning the third test match against Australia. Pointing out the batting figures of the Indian middle order test batsman in the fourth innings, Babul said that Vihari murdered cricket. The tweet grabbed the attention of both Ashwin and Vihari who reacted to it and made it go viral.

Ravichandran Ashwin and Hanuma Vihari became super heroes of the country after making 39 from 128 balls and 23 from 161 balls respectively for the team which played a major role in the result of the third test between India and Australia. Hanuma Vihari and Ravichandran Ashwin made a valuable 62 runs partnership from 259 balls. Team Australia declared their innings with a lead of 407 runs to win the match. However, Pujara, Ashwin and Vihari displayed quality batting and managed to stay till the end of fifth day to draw the match.

While team India was widely expected to lose all the wickets on the fifth day against the world’s best bowling line up and lose the match, the low order duo showed character and prevented team India from a loss. Wishes from all over the country poured for team India for their collective contributions to the team without big names such as Virat Kohli, Bhuvaneshwar Kumar and Mohammed Shami.

However, Babul Supriyo felt that team India missed the opportunity of winning the match and believed that Hanuma Vihari caused the damage. “Playing 109 balls to score 7 !That is atrocious to say the least•Hanuma Bihari has not only killed any Chance for India to achieve a historic win but has also murdered Cricket.. not keeping win an option, even if remotely, is criminal. PS: I know that I know nothing abt cricket” his tweet read.

Playing 109 balls to score 7 !That is atrocious to say the least•Hanuma Bihari has not only killed any Chance for India to achieve a historic win but has also murdered Cricket.. not keeping win an option, even if remotely, is criminal.
PS: I know that I know nothing abt cricket

This tweet of him garnered wide reach and nearly three thousand people shared it. The tweet also grabbed the attention of the batsman himself. Without losing his cool or making any defensive statement, Vihari made a subtle reply to the man which is going insanely viral in the micro blogging social media site. He just wanted Babul to spell his name correctly while writing.

So far the tweet garnered 40 k likes and Ravichandran Ashwin captured the screenshot of the reply to upload in his official twitter account. “ROFLMAX!!” said Ashwin while sharing the tweet which is also going viral.

Both the tweets of cricketers are receiving positive reactions from fans as many of them valued the effort they put in levelling the match and the series against Australia in Australian soil. “Sorry you to put with these idiots 🙁 Woke at 6 am in the uk to watch and even my polish friends understand how big the draw is now” wrote a fan to Ashwin and many others stood by their side.

Good he has not watched Rahul dravid's defence 1 run in 40 balls , he would have given up 😂😂

.@SuPriyoBabul Now that everyone is aware that what @Hanumavihari was going through and yet held the fort for our country leading to a draw ( which is as good as a win as it denied a win for Aus) you should immediately apologise. Hope it is not too much to ask for ! 🙏

“Kasi Theatre” Got Punished For Allowing More Than 50% Occupancy !! Check Out The Fine Amount
Madhavan’s Heart Winning Reply To Fans Who Thrashed Him For “Maara” !!