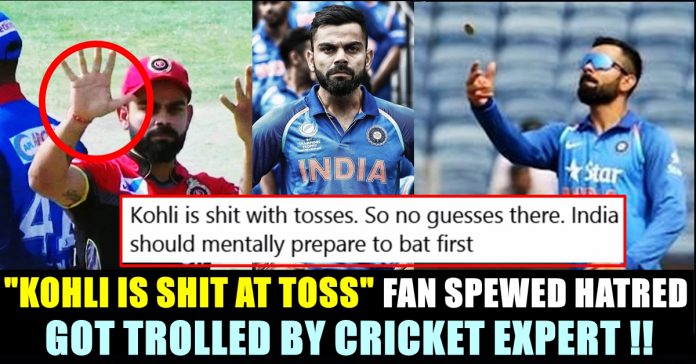 Harsha Bhogle, one of the prominent cricket commentators of this new era of Indian cricket, is also known for interacting with his followers in twitter. The cricket commentator is currently enjoying more than 80 lakh followers in the micro blogging social media site. Ahead of the test match series which is going to take place between India and New zealand, Harsha Bhogle posted a video of his analysis through Cricbuzz.

One of his 80 lakh followers, replied to the tweet of Harsha by slamming the toss winning ability of the national captain. The user wrote “Kohli is shit with tosses. So no guesses there. India should mentally prepare to bat first” to express his frustration.

Kohli is shit with tosses. So no guesses there. India should mentally prepare to bat first

Replying to the tweet of the user, Harsha, in a way of trolling him back, asked how can one be good at winning tosses. “Can anyone be “good” at the toss?” he questioned the user through his reply which received nearly three thousand likes so far. Here’s his reply :

Can anyone be "good" at the toss? https://t.co/DlkcLwrq7h

The toss factor is not helping Kohli while captaining both IPL and Indian team which is evident through the winning percentage of toss throughout his captaining career. In the recent ODI series of India against Australia, India didn’t even win a single toss. Kohli said “We have literally taken the toss out of context, and we are as prepared as possible to do something the opposition asks us to do. That’s been the difference, even if we lose the toss, we have the belief that we can play expressive cricket to get results our way” after the series.

India exited in the world cup semi finals after losing to New Zealand by not able to chase down 240 runs. In that match India lost the toss and forced by New Zealand to field first. “We spoke after the world cup, the way we exited, you can’t always look for a situation that should go your way at the toss” he said regarding the world cup exit.

Coming back to the reply tweet of Harsha, let us have a look at the comments his tweet received :

Jay from Sholey. Use the same coin. 😂

LoL… Sending someone else may work.. 😛

Modi & Shah can be.
If you give them a Electronic Tossing Machine.

Time to hire a toss coach?!!

Do you think the frustration of the fan is acceptable ?? Comment your views !!

“Blue Satta” Maaran Thrashed The Title Look Of Superstar Rajinikanth’s Next !! Check Why

Unlike his routine, reviewer Blue Satta Maaran who is known for giving harsh reviews to commercial films only after watching them in theatre, expressed...

On Thursday, the Cuddalore all women Police arrested a 23 year old Dhikshithar (a priest) on charges of marrying a minor girl. Along with...

Dhanush's first ever post in Insagram after making his divorce announcement is going viral among his fans. The actor came up with a picture...