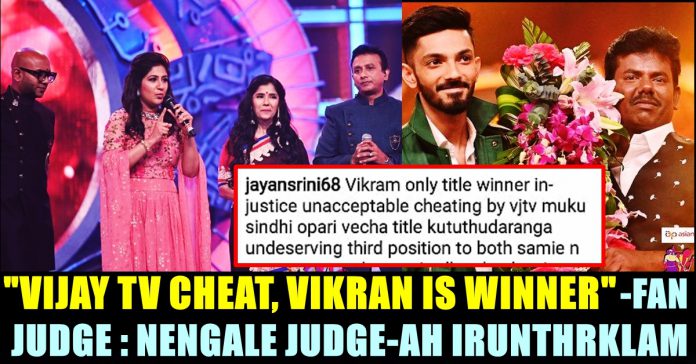 The most awaited finals of Super Singer season 7 telecasted in Vijay Television yesterday. Mookuthi Murugan emerged as the winner of the reality singing TV show which had music composer Anirudh as chief guest. Along with a trophy, he received a prize money check worth 50 lakh, according to the announcement of Vijay Television.

Murugan will also get an opportunity to record a song alongside composer Anirudh Ravichander, who is currently working in Superstar Rajinikanth’s “Darbar” and Thalapathy Vijay’s Thalapathy 64. The contestants, who reached the finale alongside Murugan were Gowtham, Vishal, Punya, and Vikram. Vikram emerged as the first runner-up, and was awarded jewels worth Rs 25 lakh. Vishal and Punya stood as second runners-up, the report further added.

Murugan, who comes from a humble rural background, seemed ecstatic to be announced as the winner. He thanked all those who stood by him, believed in his talent and gave him the chance to prove him on the singing platform. However, this announcement from the show instigated big time debates in social media platforms.

One of a user wrote “Such a fraud channel 🙄😕!! Punya was so deserving even vikram and sam.. they never make a deserving contestant win rather make a sad background person win. Every single time this happens.. every time… fraud”

Such a fraud channel 🙄😕!! Punya was so deserving even vikram and sam.. they never make a deserving contestant win rather make a sad background person win. Every single time this happens.. every time… fraud #supersinger7 https://t.co/ofBzJ8PfFU

While announcing the final result Singers Unnikrishnan, Anuradha Sriram, Benny Dayal and Swetha Mohan who judged the entire season along with the grand finale were present in the auditorium. One of a social media user had the courage to express his emotion to one of a judge of the show. One of a judge Benny Dayal, yesterday posted a picture of himself in his official Instagram account.

To this comment of the social media user, Benny Dayal simply replied by saying that he could have been the judge for the entire season. “Amazing neenga judge aa irindhirukanum” read the reply of Benny.

What do you think on this reply of Benny Dayal ?? Comment your views !!