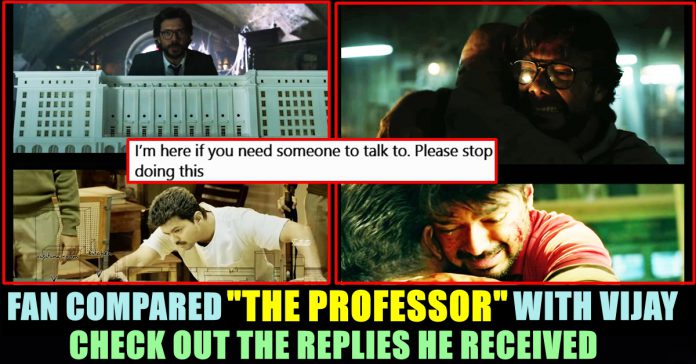 Fourth part of Netflix’s successful web series “La Casa De Papel”, popularly known as “Money Heist” released recently only to trend worldwide. The series which garnered fans from all over the world with its previous three parts, didn’t fail to impress its followers in the fourth part as well. With compelling characters, chronological narrative structure and most importantly the intricate heist which makes the viewer to reach the edge of his seat for every scene gained the series a global level acclaim.

Money Heist is Netflix’s most watched program in four major countries such as France, Italy, Argentina, Chile. Binge watchers from our country are no exception which is evident through the memes and write-ups surfacing in social media platforms regarding the series since the release of the fourth part. Their obsession towards the series went too far that they started comparing the lead characters of the series with their favourite stars.

One such twitter user from Tamil nadu came up with a series of comparison pictures which had pictures of “The Professor” aka Sergio Marquina along with actor Vijay. As we all know, actor Vijay is one of the leading actors in Kollywood with huge number of fans. The comparison pictures showed both of them striking similar pose and the fan took time to capture screenshots from “Money Heist” and from the movies of Actor Vijay to make it look appealing.

Adding the post, the fan wrote “Drawing parallels. The Professor and Vijay : a thread” as his caption.

This comparison doesn’t go well with the online users as expected. “I’m here if you need someone to talk to. Please stop doing this” wrote one of a user to express her disagreement. Check out some of the reactions it is receiving below :

How to spoil a wonderful memory 😂😂😂

Omg how jobless are you 😂

I’m here if you need someone to talk to. Please stop doing this

However, this is not the first time a Tamil cinema fan comparing “The Professor” with Vijay. The “Vaathi Raid” version of “The Professor” was made months ago, in which we can see the song from “Master” having the visuals of Professor from “Money Heist” series.

These kind of comparisons clearly proves that the mainstream audiences of Tamil cinema has started loving original contents from Western countries. Few days ago fans of the same actor compared his “Minsara Kanna” with Oscar winning “Parasite” and they almost filed a case against Bong joon ho. These instances clearly indicates that it is high time for Tamil filmmakers to stop feeding Tamil fans the so called “Commercial films for family audience” with high profile actors and to start concentrate on contents in order to elevate quality of Tamil films to the next level.

Previous articleVignesh Shivan’s Captions Made Nayanthara’s Fans To Troll Him !!
Next articleKamal Haasan Raised Voice Against 9 PM Campaign When Other Top Actors Failed !!

Team India is heading towards a massive victory in the second test against team England in Chepauk stadium of Chennai. Setting a mammoth target...