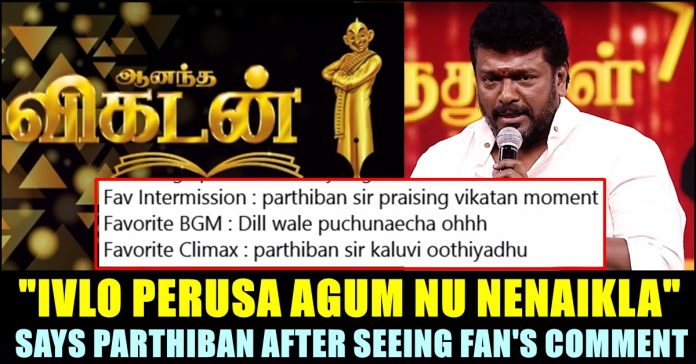 For not recognizing his experimental venture Oththa Seruppu Size 7, Director/Actor Parthiban refused to receive any kind of award from Vikatan magazine and announced it on their own stage. Now, a twitter user trolled Vikatan by mentioning the incident in one of their Twitter post. To our surprise, Parthiban himself reacted to it.

Parthiban who is very interactive with his fellow twitter users, immediately replied to the troller by saying that he didn’t expect his speech to explode this much. “அது இவ்வளவு பெருசாகும்னு நான் நினைக்கல” he wrote in the reply. Check out his reply tweet below :

Radhakrishnan Parthiban was visibly upset as Vikatan didn’t consider his movie in any of the categories in its award function. Know for his uniqueness, Parthiban who amused Tamil cinema audience with his creations, recently came up with an unique film which revolves around only a single man.

As his movie is being lauded by the people who watched it, the filmmaker received awards for it in various award functions. On seeing his film not getting considered in any category in Vikatan awards 2019, Parthiban has made an important announcement on the stage of Vikatan awards. Parthiban said that he got 2 national awards till and his OS7 is in the list of Oscar’s eligible list but it took no place in the list of Vikatan awards. The director also made in clear that he is not going to receive any award from Vikatan in future.

Result On The First Elimination Of BIGG BOSS Ultimate Revealed !!